Meet the Type 16: Why Japan Is Buying More Of These Deadly Tanks 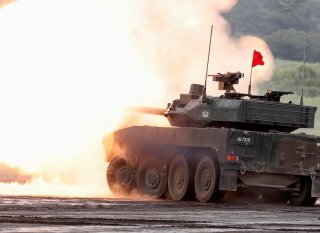 The Japanese Ministry of Defense (MoD) has announced that it will purchase additional Type 16 Mobile Combat Systems (MCS) for use by its Ground Self-Defense Force (JGSDF). This 21st-century tank destroyer has been widely deployed across the Japanese islands in place of the more powerful—but far more expensive—Type 90 and Type 11 Main Battle Tanks (MBT). The vehicles are well suited for transportation by aircraft, which can enable these to be deployed throughout the Japanese archipelago.

Defence-Blog reported that the Japanese government plans to spend $2.2 billion to buy 33 additional Type 16 MCSs according to the Defense Programs and Budget of Japan for 2020, which was published in late March. The vehicles, which were designed by the MoD Technical Research and Development Institute were based on similar vehicles, such as the South African Rooikat and the Italian B1 Centauro, are produced by Mitsubishi Heavy Industries and carry a crew of four. This includes a commander, loader and gunner who are stationed in the turret while the driver is located at the front right of the vehicle between the first and second wheels.

Unlike the larger MBTs, the Type 16, which was first publicly revealed in 2013, was designed for light to medium territorial defense and tactical reconnaissance. It can provide direct fire support for infantry units and can engage hostile armored vehicles as well as buildings and field fortifications. It can also supplement MBTs.

Japan does not have what could even remotely be considered a solid track record with armored vehicles. During the Second World War, its tanks fared poorly in the face of superior Allied tanks. Its Type 95 light tanks, which weighted just eight tons, were no match for the American M4A2 Sherman tanks.

Throughout the Cold War, the perceived threat was from a Soviet invasion, but in the 21st-century, Tokyo is now more concerned it could face an invasion from China—notably in its small uninhabited Senkaku Islands, but also in the Ryukyu island chain, which Beijing has stated are historically Chinese territory.

While Japan is relatively small, the fact that it is made up of 6,852 islands presents a serious problem in getting armored vehicles to the potential frontlines. Again, this is where the Type 16 could be seen to be more agile and mobile. Wheeled fire support vehicles are also cheaper to produce and maintain than MBTs, and have a higher speed on hard surface roads.

The Type 16 is armed with a 105mm rifled gun, a licensed copy of the British Royal Ordnance L7 built by Japan Steel Works (JSW). The gun is therefore compatible with standard NATO 105mm ammunition. However, the vehicle lacks an automatic loader and requires that rounds are loaded manually, reportedly due to balancing issues within the turret, but this also saved on development and production costs.

The secondary armament consists of a coaxial 7.62 mm (.30 caliber) machine gun and a Browning M2HB .50 caliber machine gun mounted on the loader’s hatch at the right rear of the turret.