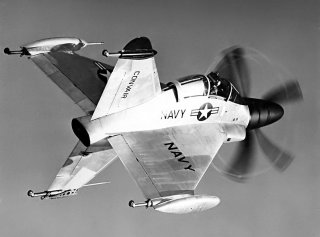 After the Second World War, the U.S. Army and Navy began research into vertical takeoff and landing (VTOL) aircraft as a way to maximize aircraft carrier usefulness. Aircraft carriers had especially proven their worth during the Pacific Theater, where thousands of planes had taken off from American flattops.

A viable VTOL aircraft could in theory perhaps double the amount of airframes an aircraft carrier could carry. Rather than needing a long flight deck with which to take off, a VTOL plane could simply rise off of the carrier and into the sky.

Some ideas of what a proper VTOL aircraft would like were rather strange. Successful VTOL aircraft like the Harrier Jump Jet, or the F-35Bs are able to angle their main engine exhaust downwards to generate lift—but in the early VTOL years, the Army and Navy opted for a tail-sitter design.

Like the name implies, tail-sitters sat on their tail, nose pointed up to the sky and take off vertically rather than horizontally. They land in the reverse, flying straight down—backwards—and onto the plane’s tail, which serves as a quadpod landing gear. The tail is necessarily strengthened to bear the plane’s weight without breaking.

The XFY Pogo was a very odd bird. It had a four-finned tail assembly with small caster wheels attached to the back, allowing the Pogo to land and move on its tail. Though it was a turboprop, the Pogo used an unusual contra-rotating three-bladed propeller that was over 16 feet in diameter. This design gave the Pogo the enormous amounts of thrust it required to hover off the ground and into the air.

The spinner at the center of the propeller blades was elongated to provide space for carrying a radar antenna to tracking enemy aircraft, but engineers had a difficult time preventing the antenna from spinning.

Though the Pogo could take off and land in the vertical position (a neat video of which can be seen here), it did have some drawbacks. It struggled to slow down quickly after attaining high speed, because it did not have an air brake. Landing the Pogo was also problematic, as the pilot would have to lean over his shoulder, similarly to when a car is parallel parked.

These complications doomed the XFY Pogo. Novice pilots would never be able to safely take off or land a tail-sitter like the Pogo. This alone was reason enough to cancel the program. The other insurmountable issue was the jet engine.

Fortunately for the Navy, Harrier Jump Jets were introduced in the 1960s, solving their VTOL conundrum. Only one flight-worthy XFY Pogo was ever produced, and it never moved past the prototype stage.