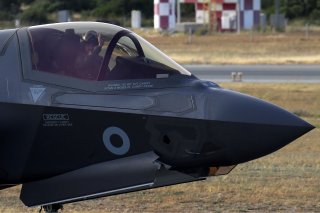 The U.S. Marine Corps arguably is the biggest champion of, and the most important user of, the F-35 stealth fighter.

But Marine Corps commandant Gen. David Berger has made it clear that the Corps could scale back its planned, 420-plane F-35 buy as it reorganizes for naval warfare against China. Berger long has said he wants Marine battalions to be lighter and faster-moving.

“Right now, the [F-35] program of record plows ahead as it is,” Berger told reporters on April 1, 2020. “But I’m signaling to the industry, we have to be prepared to adjust as the operating environment adjusts.”

In his capacity as an airpower consultant, in 2010 Dudderar penned informal, unclassified analyses for Navy admirals outlining problems with the F-35. Years later Dudderar released his analysis to the public.

“The U.S. Marine Corps F-35B short-takeoff, vertical-landing airplane exists today only because the USMC has continued to insist that it needs its own high-speed-jet air force to perform close air support for their amphibious assault forces ashore,” Dudderar wrote.

In World War II’s bloody Guadalcanal campaign, the Marines frequently lacked air support. Seventy years later, the Corps still tells us it can’t trust the Navy or the Air Force to provide air support in the next amphibious assault. The Marines say that they must have their own jets.

Of course, they refuse to describe in any detail what the next amphibious assault might look like. We are left to believe it will be another Guadalcanal. But I don’t think that’s the case.

Let me make one fact perfectly clear. As with the Harriers before them, the logistical support burden for F-35Bs at an “austere” base ashore is prohibitively onerous!

The fuel, bombs, bullets, parts, tools, maintenance personnel and their personal and professional logistics load, the command-and-control capability ashore, the self-defense forces to protect all of these valuable assets in a by-definition hotly contested environment are just too much for the Marines or even a joint force to sustain for more than the first operational mission cycle — or as soon as the first airplane returns to this supposedly austere base for a mission turnaround.

The Marine Corps has never successfully demonstrated this ashore operational capability with the Harrier because it has always been too hard even in peacetime conditions. Supporting and sustaining the F-35B will be even harder — and impossible in the heat of battle.

If the scenario is more intense and less permissive, the F-35B force ashore at its austere base will be under severe threat from enemy ground and air attack. That could cause more resources to be sucked away from the troops penetrating ashore in order to man static ground and air defenses for the F-35Bs.

If the conditions are that nasty, it is arguable whether the amphibious assault will even be appropriate until conditions are much more favorable and the beachhead considerably softened by bombardment.

In short, I doubt that today and in the foreseeable future we will ever resort to accept harsher-than-Guadalcanal tactical conditions for an offensive insertion. The likelihood of our doing this is so infinitely small that it alone would not support the F-35B procurement.

In a nod to concerns like Dudderar’s, Marine commandant Berger in March 2020 proposed a new force plan for 2030 that reduces 16-plane F-35 squadrons to 10 planes. Previously, the Marines planned to have nine 16-plane squadrons and 11 10-plane squadrons.

If Congress approves the plan, all of the Corps’ stealth-fighter units will be smaller, lighter and easier to support. The plan does not actually reduce the Corps’ overall F-35 purchase, however.