How Many F-35s Does the U.S. Marine Corps Need? 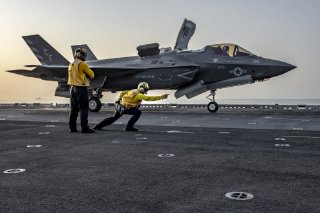 The U.S. Marine Corps arguably is the biggest champion of, and the most important user of, the F-35 stealth fighter.

But Marine Corps commandant Gen. David Berger has made it clear that the Corps could scale back its F-35 buy as it reorganizes for naval warfare against China. A pilot shortage is another factor in possible cuts.

“Right now, the program of record plows ahead as it is,” Berger told reporters on April 1, 2020. “But I’m signaling to the industry, we have to be prepared to adjust as the operating environment adjusts.”

The Marines drove much of the F-35’s development starting in the mid-1990s. The Corps was trying to square two separate problems. It wanted fewer aircraft types in order to simplify its training and logistics. But it also needed a vertical-landing fighter that could fly from the U.S. Navy’s amphibious assault ships.

That meant replacing AV-8 jump jets and conventional-takeoff F/A-18 fighters with one type. The Pentagon thus crammed into the multi-service Joint Strike Fighter -- a replacement for most U.S. Air Force, Navy and Marine fighters -- a requirement that one variant of the JSF is capable of vertical landings.

The result was the F-35B, a variant of the JSF with a bulky, downward-blasting second engine just behind its cockpit. To preserve some airframe commonality across the three F-35 variants while also accommodating the Marines, Lockheed Martin designed the F-35 so that the B-model could fit the vertical-lift-fan engine with minimal changes.

That’s why the F-35 in all three variants is so blocky and bulky, and by extension lacking in acceleration and maneuverability. It’s a fighter built around the idea of a lift fan, even when two of its three models don’t actually include the lift fan.

Having compromised the F-35, the Marines now are signaling they might back away from their planned, 420-plane purchase. Those 420 planes originally were supposed to equip 20 front-line squadrons and two training squadrons. Nine of the combat units would have 16 jets. The rest would have 10. Having purchased around 100 F-35s for $100 million apiece, the service in mid-2020 is working on converting its fifth squadron to the type.

But Berger weighed the demands of island warfare against missile-armed Chinese forces and decided that the Corps needed to lighten its units. The commandant’s force plan for 2030, which he revealed in mid-March 2020, reduces the 16-plane F-35 squadrons to 10 planes.

The plan does not actually reduce the Corps’ overall F-35 purchase, however. Presumably, the redundant 54 jets would go into the attrition pipeline to eventually replace crashed and worn-out planes.

Another problem looms. A pilot shortage that affects all the U.S. armed services. The Marines have struggled to recruit adequate numbers of F-35 pilots. Typically a military service needs two pilots for every plane.

“Our continued inability to build and sustain an adequate inventory of F-35 pilots leads me to conclude that we must be pragmatic regarding our ability to support” the JSF program, Berger said.

Berger in the coming months still might decide the Marines don’t need as many 420. But it might not be because he can’t find pilots for them.