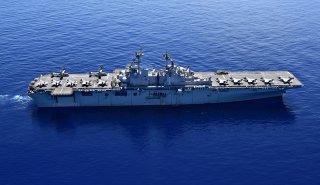 Turning an amphibious ship into a refueling platform probably wouldn’t involve a lot of changes to the vessel’s hardware. After all, amphibs already land, refuel and launch aircraft. But the Navy and Marines haven’t yet developed doctrine for FARS. In other words, no one really knows how a refueling platform fits in the fleet’s existing deployment processes.

David Axe serves as Defense Editor of the National Interest. He is the author of the graphic novels  War Fix, War Is Boring and Machete Squad. This article first appeared last September.