Milestone: the USS Gerald R. Ford Aircraft Carrier Is Headed Out to Sea 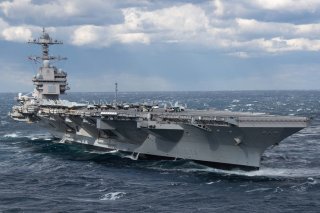 The U.S. Navy’s high-tech and ground-breaking new USS Ford-class aircraft carrier will go to sea later this year, a development that marks a historic and pivotal step in the evolution of maritime warfare.

In development for many years, the USS Gerald R. Ford is the first in class of a new generation of carriers intended to propel U.S. naval dominance into the twenty-first century.

“As the Nimitz-class approached the end of its life in the late 1990s, the Navy decided to invest in a new aircraft carrier. We needed a new design and the Ford-class was designed to take advantage of improved technologies, networking improvements and smart weapons. The Ford has three times the electrical generating capability and its flight deck is optimized with aviation support systems designed for safer and more efficient execution for flight operations,” Captain Brian Metcalf, program manager for Ford-class carriers, told an audience at the 2022 Sea Air Space Symposium.

Metcalf is likely referring to the larger deck space built into the Ford-class as opposed to the Nimitz-class carriers, which allow for a 33-percent increase in sortie rate. This generates a massive enhancement in operational tempo should a carrier-launched air attack campaign need to expand in scope, size, and range. The capability to launch more aircraft in rapid succession projects more firepower and dwell time over a target area. Further, should new targets emerge or commanders receive new time-sensitive intelligence data, attacking fighter jets will be better positioned to respond.

By referring to “aviation support systems” designed for safer and more efficient flight operations, Metcalf may have been pointing to flight safety and efficiency advantages generated by the Ford-class’ weapons elevators and Electro-Magnetic Launch System (EMALS). Using electro-magnetic and not steam or hydraulic propulsion technology, the EMALS enables a smoother, tailorable take-off which creates much less wear and tear on deck-launched fighter jets. The use of electrical systems replaces some of the manpower-intensive steam and hydraulic systems, Metcalf explained.

The Ford’s weapons elevators create a dynamic wherein fighter jets can be refueled and rearmed much faster and more efficiently, making them able to quickly return to air attack missions.

“All 11 of the weapons elevators have been turned over to the crew. The crews operating those elevators are gaining proficiency for the deployment,” Metcalf said.

The Ford-class is also able to reduce manpower by virtue of its use of unprecedented levels of computer automation, systems which enable self-maintenance, equipment monitoring and other key procedural tasks. This allows for the Ford-class to operate with 900 fewer sailors on board, increasing operational efficiency.

Perhaps of equal or even greater significance, recent shock testing revealed that the USS Ford can operate as a “survivable” ship despite all of the advances in technology built into the platform. Many bombs of different shapes and sizes were exploded near the Ford during “Shock Trials” to assess the platform’s ability to sustain operational functionality while under attack. The USS Ford’s performance was exemplary, according to Navy leaders and industry participants, who were very confident in the new carrier’s ability to operate at war.

“The Shock Test was very impressive. There were very few issues that weren’t able to be resolved on the ship itself. Over 80 percent of the issues found were able to be resolved onboard the ship, so I would say technically, it will be a fantastic ship,” Rick Giannini, chairman of the Aircraft Carrier Industrial Base Coalition and CEO of the Milwaukee Valve Company, told The National Interest in an interview.