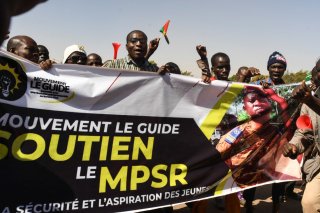 In a confirmation that a coup d’etat was carried out in Burkina Faso, representatives from Burkina Faso’s military announced that they had deposed President Roch Kabore, dissolved the government and legislature, and suspended the country’s constitution.

The statement announcing the coup was signed by Lt. Col. Paul-Henri Sandaogo Damiba, the leader of the Patriotic Movement for Safeguard and Restoration, or MPSR, the formal name of the military junta that seized control of the country.

“MPSR, which includes all sections of the army, has decided to end President Kabore’s post today,” the statement said.

In justifying the actions of the military, which mutinied against Kabore and took him prisoner on Sunday night, the junta argued that the country’s security situation and unity had significantly deteriorated under the former president’s rule. The statement claimed that the MPSR would restore “constitutional order” to Burkina Faso within a “reasonable time.”

The statement also announced that the country’s borders had been closed and a nightly curfew would be enforced.

Burkina Faso has confronted an Islamist insurgency in its eastern border region for more than half a decade. The country borders Mali and Niger, two other unstable states that have been roiled by jihadist violence since a 2012 uprising in Mali and the post-2014 emergence of Islamic State affiliate groups in West Africa.

Burkinabe troops have suffered heavy casualties in the fight against the insurgents, and discontent with Kabore and the ruling authorities was widespread in the military prior to the coup. Before the overthrow was announced, the mutineers had circulated a list of six demands, including the addition of troops to the army to help it confront the insurgency.

The international community largely condemned the coup. UN Secretary-General Antonio Guterres said that the international organization “strongly condemn[ed] any attempted takeover of government by the force of arms.”

U.S. State Department spokesman Ned Price stated that the United States was “deeply concerned by reports” of Kabore’s imprisonment and overthrow. “We condemn these acts and call on those responsible to deescalate the situation, prevent harm to President Kabore and any other members of his government in detention, and return to civilian-led government and constitutional order,” Price’s statement read.

The African Union and the Economic Community of West African States (ECOWAS) both condemned the coup. Mali and Guinea, two other African governments currently ruled by military juntas, have been suspended from the African Union and ECOWAS. Damiba and the MPSR government may face similar suspensions.