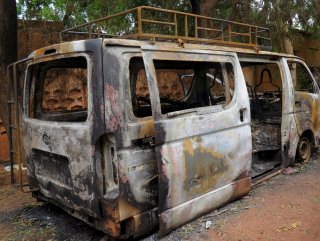 The U.S. Department of State is “deeply concerned” after 180 bodies were found in northern Burkina Faso, where human rights activists say U.S.-backed forces may be performing mass executions.

Human Rights Watch raised the alarm in a Wednesday report, claiming that dozens of bodies were found around the town of Djibo, and that “[e]xisting information points toward government security forces” as the culprits for the “killing field.”

The United Nations also urged for an investigation in neighboring Mali two weeks ago, after reports emerged that government forces had committed at least 230 extrajudicial executions.

“The United States is deeply concerned by the growing number of allegations of human rights violations and abuses perpetrated by state security forces in the Sahel,” U.S. State Department spokeswoman Morgan Ortagus said in a statement about the two reports.

She emphasized that U.S. aid “must not be used in any way that contributes to violations or abuses of human rights and that without prompt and thorough action to address these allegations, U.S. security assistance may be at risk.”

Violent extremist attacks in Burkina Faso, Mali, and western Niger have increased by 250% in the past two years, and extremist groups are “not degraded nor contained,” according to an internal U.S. government watchdog report released in February 2020.

These extremists have killed hundreds of civilians over the past several years, according to Human Rights Watch. In one incident, ISIS beheaded ten Christian hostages on Christmas Day.

Atrocities by government forces may be throwing fuel on the fire.

“Continued human rights violations and abuses risk undermining the state’s credibility with its citizens, serve as a recruiting tool for terrorists, exacerbate the existing humanitarian crisis, and undermine efforts to bring security and stability to the region,” Ortagus pointed out.

Five states in the Sahel—Burkina Faso, Chad, Mali, Mauritania, and Niger—had agreed to investigate such abuses in a June 30 summit.

The New York Times had previously reported that Burkinabé government forces were killing civilians without trial in several different towns, including Djibo.

The Burkinabé government has cast doubt on its responsibility for the killings.

Defense Minister Moumina Cheriff suggested in a letter to Human Rights Watch that rebels dressed in military uniforms could have conducted the killings, claiming that it is “difficult for the population to distinguish between armed terrorist groups and the Defense and Security Forces.”

“Yes, Djibo has been attacked and there are jihadists not so very far from Djibo,” one resident told Human Rights Watch. “But on the days before seeing bodies, we weren’t aware of any clashes or battles between the jihadists and army in the middle or outskirts of Djibo. Word travels fast and we’d know if this were the case.”