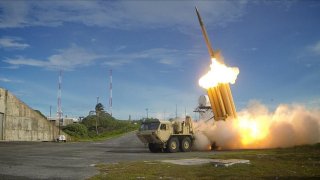 As the coronavirus-caused lockdowns begin to wind down and life gradually returns to normal, it’s time to shift our focus back to other grave threats to our health and security that have mostly fallen off the radar.

The creation of the Space Force at the end of December has been a positive step in meeting new threats, even if it has been relatively under reported in competing for attention with coronavirus. While public attention returns to national defense initiatives like the Space Force, the closely related area of missile defense can’t be overlooked.

History shows us that reliable national defense is built on layers of complementary and redundant systems. This layered architecture provides America with holistic protection from adversaries should any one piece of equipment or system fail or suddenly become obsolete.

Within missile defense, these layers are a complex, yet vital, system of systems, each piece critical to providing optimal efficiency and eliminating single points of failure. Components are replaced as new technology is developed.

In 2016, for example, the Pentagon began to develop a more reliable replacement kill vehicle for our current ground-based interceptors which are exclusively based in Alaska and California. Originally scheduled to go operational this year and delayed until 2025, it was scrapped in August 2019 at the convenience of the government due to fundamental technical issues.

But the project didn’t die in vain; much of the intellectual knowledge was funneled into a new effort, dubbed the Next Generation Interceptor.

When fielded, the new interceptor will be a phenomenal improvement to our ballistic missile defense shield. But there’s a catch. Any number of setbacks can occur during testing and development which could push back by years the anticipated 2027 to 2028 fielding date. Using the delays of the now-shelved replacement kill vehicle as a benchmark, we’re probably looking at a nearly fifteen-year gap between when we need improved missile defense for the entire country—today—and when we will get it.

While we wait for new technology, we could field existing and reliable systems such as the Aegis Ashore package of SM-3 IIA interceptors and Spy-6 radar currently used in Europe.

This is particularly important considering the current gap in physical protection along the East Coast. The forty-four ground based interceptors which can shoot down incoming intermediate and long-range ballistic missiles are all on the West Coast and thus well positioned to strike launches coming physically from North Korea, China, and launch sites in Russia.

But what about trajectories from Iran? The regime is racing for the capability to strike us with ICBMs. And what about their ally Venezuela? If Iran manages to place intermediate range missiles outside Caracas, potential strikes could come over both East and Gulf Coasts. Venezuela recently announced its military will escort Iranian ships carrying petrol, so it’s important to consider what else they may carry. It’s not hard to imagine when we consider the Cuban Missile Crisis of 1962. Just switch the hostile countries while the same principle applies.

Thus, bolstering the use and number of missile defense systems not only covers a vulnerability in our layered defense, but falls right in line with the mantra of fiscal responsibility delivered by every senior defense acquisition leader. We’re not faced with an either-or situation. We can spend research and development dollars for a new interceptor, while making use of the products and capabilities we already have. That’s a gap-sound national security investment.

Throughout my time in the Pentagon working directly with senior Air Force intelligence and space acquisition leaders, we relentlessly focused on tech advances to improve our ability to fly, fight and win. Yet we also factored all existing assets into the equation to ensure America’s ground and surface forces would never face an opponent bigger or more capable.

Low-tech but high-threat antagonists continue to improve their military architecture, including developing and testing their ballistic programs. Iran is fresh off of actually using its short-range ballistic missiles to attack American forces in Iraq, firing at least twelve at two U.S. base camps. Just last month it launched its first successful military satellite, signifying a giant development leap forward in its intercontinental ballistic missile program.

Considering the aggression of North Korea, Iran and potentially other hostile dictatorships, can America really wait until the end of this decade or possibly later to eliminate vulnerability in our homeland missile defense? Cost-effective investment in reliable and currently fielded intercept platforms must bridge the gap to future defense technology.