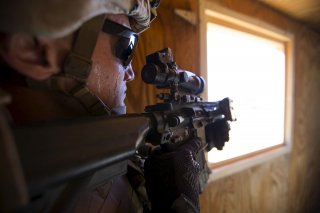 Finally, the United States Marine Corps has a new sniper rifle. After much testing, the Mk 13 Mod 7 is available to scout snipers and Recon Marines to partially replace the Vietnam-era M40.

“Scout snipers are now being fielded a weapon system that makes them even more lethal at distance than they were previously,” explained Captain Nick Berger, Marine Corps Systems Command’s project officer for the Mk13 in a USMC release. “This weapon better prepares us to take the fight to any adversary in any clime and place.”

Though the M40, which the Mk13 is replacing, has served many generations of USMC snipers well, it is beginning to grow long in the tooth. Chambered in the 7.62x51 millimeter NATO round, the platform’s effective firing range is not more than 1,000 meters, despite steady upgrades to the bolt-action platform.

While the Mk13 will replace the M40 while on deployment, Marine scout snipers and Recon Marines will continue to train with the older platform in order to conserve the Mk13’s operational lifespan. “We are looking to conserve the barrel life of the Mk13 Mod 7 and facilitate training aboard all installations,” Captain Berger stated.

A great measure of the Mk13’s popularity with Marines who have had the chance to test the weapon system is thanks to the more powerful .300 Winchester Magnum cartridge the rifle is chambered in. Though the bullet is the same diameter as the 7.62x51 millimeter NATO, the cartridge is nearly a third longer.

Major Mike Brisker, a team lead for Infantry Weapons explained that “when shooting the Mk13, the bullet remains stable for much longer,” thanks in part to the cartridge’s extra propellant. “The weapon gives you enough extra initial velocity that it stays supersonic for a much longer distance than the M40A6 [and the 7.62x51 millimeter NATO cartridge].”

Maximum effective range is therefore increased to around 1,300 meters and roughly on par with the Army’s M2010 Enhanced Sniper Rifle.

The Mk13 is issued to Marine snipers with the M571, an “enhanced day optic that provides greater magnification range and an improved reticle.” The optic allows snipers to better and more quickly identify targets and “creates a larger buffer between the warfighter and adversaries.”

In addition to the day optic and other accessories, the Mk13 is issued to Marines with a suppression device and is part of a wider trend in the Corps of equipping individual riflemen with suppression devices to enhance battlefield communication effectiveness and to keep Marines hidden by reducing flash and acoustic signature.

With the Mk13 Mod 7, the Marine Corps is getting a better option for dealing with long-range threats. Captain Brisker summarized what the Mk13 means for the Corps, stating that “the fact that we managed to get a gun of this capability out to our sniper teams is really positive. We’re looking forward to doing even more in the future.” Enemies beware.