Moderates Must Stop COP26 From Being a Flop for America 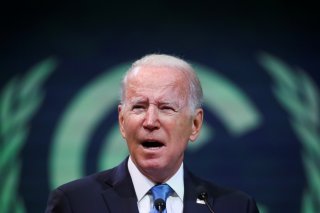 In COP26’s overtime negotiations the event's host, UK climate change Cabinet Minister Alok Sharma, was reduced to tears on Saturday. The only tears shed by the American public, however, were those of boredom. But politicians have let their nations down on not framing the argument in a conservative, community-focused, and internationally relevant context. They have opted instead to adopt Congresswoman Alexandria Ocasio-Cortez’s (D-NY) tactics: packaging unprecedented state spending and unrelated ideological agendas into pork-barrel policy bills. Conservation should be a concern for everyone, and Republicans' abstinence from engagement isn’t doing Americans or their planet any favors.

In the United States, there isn’t much conversation about environmental issues at all. A 2020 Yale study found that sixty-four perfect of Americans rarely or never discuss global warming; and when we do discuss environmental issues, the conversation devolves to posturing. The BBC characterized America’s interest in COP26 as “all about domestic politics.” Republicans were relegated to the free-market environmentalist fringe events like the Youth Environment and Global Conservative Climate summits.

Domestic divisions surely drive American disinterest in environmental issues, but many Americans also agree with Greta Thunberg that the COP26 and its resolutions are doomed to fail. According to a 2020 Pew study, nearly a third of Americans believe policies aimed at reducing emissions will make no difference. Can we blame them when China's planned 252 coal plants stand to increase global emissions by sixteen percent by 2030?

International climate agreements have more often been characterized by disarray and disagreement. India and China refused to comply with a pledge to abandon coal. Russia similarly set its own independent carbon emissions target. With Russia’s vice-grip on gas tightening thanks to President Joe Biden killing Keystone XL, and China’s eighty percent contribution to global battery production needed for the renewables transition, America and its allies aren’t in a position of strength to stand up to Presidents Vladimir Putin or Xi Jinping either.

The joint agreement between China and the United States announced at COP26 could de-escalate tensions between the two superpowers. But as China continues to prepare for armed conflict in the Taiwan strait, and Taiwan is excluded from COP26 and the World Health Organization, America and its allies look to be appeasing—rather than opposing—China’s imperialist unification efforts. France and Australia used the international gathering to publicly bicker about the purchase of nuclear submarines, rather than invite and ally with the very nation these military efforts seek to defend.

COP26 encapsulated everything wrong with the international order, but it did reveal how environmental concerns dictate contemporary international relations. The American people, however, have been left in the dark as to how environmental and foreign policies are growing increasingly inseparable. Thankfully, it’s easy to envision a set of environmental policies that could draw broad support from Americans across the political spectrum. As decarbonization devalues the petro-dollar, securing resource supply chains and energy independence must become fundamental elements of American foreign policy. It is with this framing that Republicans and moderate Democrats can regain control of the climate debate.

Nuclear power is cost-competitive, uses less land, and provides greater grid stability than existing renewables. It needs no Afghan lithium, Chinese batteries, or Russian gas. It isn’t weather-dependent, or low in grid inertia, causing blackouts like in Texas. A century’s worth of waste is less than households produce annually; with over ninety-four percent at low or very low radioactivity ratings. Coal-fired power produces five times more workplace deaths than nuclear and contributes to over nine million pollution-related premature deaths.

If America can collaborate with AUKUS allies to produce nuclear-powered submarines, then can’t finance from friendly nations’ investors be mobilized to bring that technology inland? Nuclear power can be built to be far less of a national security threat than the remote-controlled transformers from China in America’s grid today.

These collaborative efforts with America’s allies present abundant opportunities for economic and environmental prosperity. They have the added moral fortitude of undermining China and Russia’s stranglehold on energy and manufacturing; a populist point that wins votes. Politicians would do well to reframe the environmental debate and seek ethical and effective international market solutions to the conservation challenges America faces, foreign and domestic.

Connor Tomlinson is the Policy Director for the British Conservation Alliance and a Young Voices Contributor. He has regular by-lines in American Spectator and on talkRadio. Follow him on Twitter: @Con_Tomlinson