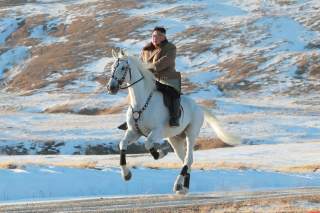 North Korea without doubt is unique. If nothing else, its claimed accomplishments rival the faux Russian achievements cited by Pavel Chekov in the original Star Trek. Yet only the Democratic People’s Republic of Korea has established a Communist monarchy, now reaching the third generation.

The real question for Kim Jong-un is whether he, like his father and grandfather, will follow the Ottoman practice of producing multiple children from multiple consorts. That always makes a succession fight much more interesting. Even so, royal baby sightings still are rare in the DPRK.

But the North Korean regime has gone a step further in claiming that Great Leader Kim Il-sung, grandfather to Cute Leader Kim Jong-un, as I call the latter, is not only god, but recognized as such by America’s legendary evangelist Billy Graham. On Kim Il-sung’s birthday last week, reported Adam Taylor in the Washington Post, the DPRK paper Rodong Sinmun reported that Graham, who traveled several times to North Korea, praised the senior Kim’s rule.

Indeed, “said” Graham: “Having observed the Supreme Leader Kim Il-sung’s unique political leadership, I can only think that he is God.” Moreover, “if God is the leader of another world, savior and ruler of the past and future life that exists in our imagination, I acknowledge the Supreme Leader Kim Il-sung is the God who rules today’s human world.” The man who raised the Bible at thousands of crusades then “said,” according to the Rodong Sinmun, “Kim is this world’s God. Why would a country like this need the Holy Bible?”

Graham is long retired, in ill health, and out of public view. Officials at the Billy Graham Evangelistic Association dismissed the claims as not reflecting “Mr. Graham’s theology or his language.” Certainly there’s no evidence that in thrall of the Great Leader the evangelist tossed aside his life’s calling to worship the modern equivalent of Baal. Kim, whose parents reportedly were believers, offered the faith no favors. To the contrary, he became one of the last century’s great religious persecutors. Unauthorized faith activities could lead to prison and death.

And Kim’s pernicious policies continued under his son and grandson. If anything, the repression has worsened. While most North Korean refugees returned to the DPRK are treated atrociously, greatest punishment is inflicted on those thought to have fallen under the sway of foreign Christians. The regime’s frantic fear of Christianity suggests inner doubts. The Kim dynasty is premised on loyalty to the top leader, who long has been treated with reverence and said to be capable of super-human feats.

Indeed, the biography of Kim Jong-il, father of the Cute Leader, was rearranged to have the former born on sacred Mt. Paektu rather than in Siberia. That buttressed Kim’s claim to semi-divinity as well. No mere mortal was he. While Graham was not quoted talking about this Kim, presumably the son of a god also is a god—and the latter’s son as well.

Yet it would behoove the North Koreans to be careful before so cavalierly claiming divine status. One of the great Old Testament face-offs came during the reign of Ahab, one of Israel’s more benighted rulers. The prophet Elijah challenged four hundred and fifty advocates of Baal, rather like the retainers surrounding the Kims today. Both sides prepared a bull for sacrifice on Mount Carmel. Baal’s prophets danced, shouted, and “slashed themselves with swords and spears, as was their custom,” but still there was no response. Then Elijah called upon the one true God and “the fire of the Lord fell and burned up the sacrifice, the wood, the stones and the soil.” At Elijah’s instruction, the people seized the false prophets and slaughtered them. (1 Kings 18:19-40)

Then there was King Herod, his hands washed in the blood of John the Baptist. Herod spoke to the people of Sidon and Tyre, who were seeking to reconcile with the king. They responded: “‘This is the voice of a god, not of a man.’ Immediately, because Herod did not give praise to God, an angel of the Lord struck him down, and he was eaten by worms and died.” (Acts 12:21-23)

It seems there is a price to be paid for claiming to be god. The penalty might be especially great for sullying the name of Billy Graham, claiming him to be a prophet of the modern Baal.

Christianity once flourished in the north as well as south of the Korean peninsula. Despite extraordinary persecution under the Kim dynasty, the faith survived. Its continued existence challenges the current Kim’s rule. Perhaps he believes that he can bolster the regime’s credibility by claiming an improbable endorsement from Graham.

But that’s not likely to work. Too much information passes over the DPRK’s borders for anyone any longer to believe the fantasies propagated in Pyongyang. Moreover, North Korean officials should beware of what happened to past prophets of Baal. A little fire from heaven just might be in store.

Doug Bandow is a Senior Fellow at the Cato Institute and former Special Assistant to President Ronald Reagan. This article first appeared several years ago.