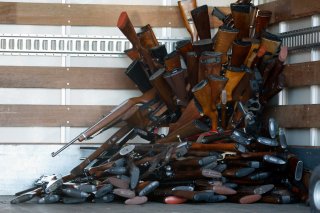 Gun control advocates have argued for years that gun control would make our streets safer. To hear some gun control supporters tell it, if we rid the country of guns there would be no violence. Of course, supporters of the Second Amendment have long countered that criminals—those who intend to break the law—would just obtain illegal firearms regardless of gun bans.

According to a new study from American University in Washington, DC, it seems that the supporters of the Second Amendment might have been right all along. The study, published in the Justice Quarterly, a publication of the Academy of Criminal Justice Sciences, used modeling and FBI data from 2006 to 2016 to examine the impact of gun laws on violent crimes that included murder, robbery, rape, and aggravated assault. The researchers found that tightened gun control measures that went into effect in Massachusetts six years before had almost no effect on violent crimes in the Bay State.

In 2014, Massachusetts had passed new requirements related to background checks for firearms sold at gun shows or through private sales while the state also created changes to firearm regulations by adopting new gun licensing procedures. The new law went into effect in January 2015, and the research on the effects of gun legislation has yielded mixed findings and the effectiveness of Massachusetts’s law is unclear.

“Gun violence remains at the forefront of the public policy debate when it comes to enacting new or strengthening existing gun legislation in the United States,” said Janice Iwama, assistant professor of justice, law, and criminology at American University, who conducted the study.

“Yet the political polarization and relatively limited scholarly research on guns and gun violence make it difficult for policymakers and practitioners to enact and implement legislation that addresses the public health and safety issues associated with gun violence,” Iwama added.

“The findings are consistent with those in other studies and future studies should explore long-term effects following the passage of the legislation,” the study’s abstract noted.

Gun control groups have longed to blame guns rather than criminals for violent acts. This past year has seen a wave of violence in many of the country’s urban centers. Chicago has seen a 220 percent increase in shootings, while other cities have seen an increase in violence. Some have attempted to cast blame at the increased firearms sales—but many Second Amendment supporters would argue the surge in gun sales to first-time buyers is a reaction to the violence, and not the cause of it—and this study would certainly argue that gun control measures aren’t stopping violent crime.