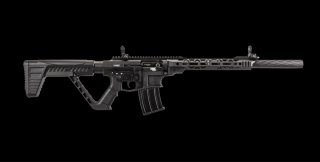 The Saiga-12, which was designed by the legendary Mikhail Kalashnikov—today the Kalashnikov Concern—was essentially a semi-automatic shotgun version of the AK-47. While it is now impossible to import an actual Russian-made version, the Kalashnikov USA KS-12 isn't just the next best thing, it offers the best of both worlds including American craftsmanship and engineering and the iconic Kalashnikov design.

Not to be outdone, Armscor/Rock Island Armory released the VR80, which became one of the hottest semi-automatic shotguns in the category last year according to the NRA's American Rifleman—even outpacing the big players in the shotgun market including Mossberg and Remington. It is a tried and true AR-style, twelve-gauge, box-magazine-fed shotgun.

While far from a new concept for the firearms world, it highlights that the consumer demand for the AR-15 is now solidly spilling over into the shotgun market. However, while the Rock Island Armory’s VR60 was in essence modeled solidly after the military’s M16 version of the AR-15 with little in the way of refinement, the second generation VR80 is a twenty-first-century take on the design.

It is still a gas-operated semi-automatic that cuts the weight thanks to upper and lower receivers that are constructed from 7075 T6 aluminum. The VR80 offers the familiar AR-15 ergonomics and controls, which means that shooters won't need to retain their muscle memory or shooting mechanics. The safety is ambidextrous, mimicking the AR-15, while the oversized magazine release is in the same position as an AR. About the biggest difference from the AR’s ergonomics is the placement of the charging handle on the bolt, which is a bit more like an AK. However, unlike with the AK, the charging handle on the VR80 can be swapped easily for left-handed users.

The VR80 has a thin metal M-LOK-compatible handguard, flip-up iron sights, space for optics and a generally low profile design. This includes a twenty-inch long barrel that almost has the look of a suppressor. Interestingly, the stock and pistol are a one-piece thumbhole style but that can be swapped out for any AR-15 style stock.

The VR80 comes with two five-round magazines, but nine and even nineteen-round magazines—those aftermarket mags for the VRBP 100—are fully compatible for those who don't mind the extra heft that the added ammunition brings.

Perhaps almost ironically while the KS-12, which is based on the Russian Saiga AK-style shotgun, is made in America at Kalashnikov USA’s facilities in Florida, the Armscor RIA VR80 is actually an import. The firearm is made at the company’s facility in Turkey so those looking for a true red, white and blue semi-auto might consider opting for the Russian design unless the feeling is that the AR is still just a bit more American in concept.

With an MSRP of $699, this might just be among the more affordable semi-automatic shotguns on the market, which helps explain how it topped the sales chart for last year and likely will be a top seller this year.