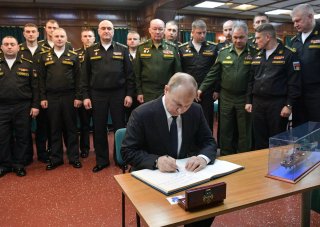 Here's What You Need To Remember: Russian servicemen still face the brutal hazing that is a legacy of the Soviet military. Still, most Russian men will never serve time in the ranks.

The Russian government is cracking down on draft dodgers in a bid to find recruits for its military.

It is also going after websites that help potential draftees escape service in a military known for harsh and spartan living conditions, and which is increasingly relying on volunteers instead of conscripts.

Russia’s Ministry of Defense has said that “the number of draft dodgers is declining,” according to the newspaper Moskovskij Komsomolets. “However, over the past period, the military prosecutor’s office has initiated proceedings against 1,000 people, mainly draft evaders or organizers of ‘evasion of service.’”

In October, President Vladimir Putin signed a decree ordering 132,000 people to be drafted for the autumn 2019 conscription period. Russia’s armed forces comprise about 900,000 active-duty personnel, plus two million reserves and 554,000 paramilitary troops. Conscripts serve for one year, though they also have option of signing on as volunteer contract soldiers—with much better pay and benefits—in return for a two-year enlistment.

Nonetheless, Russian servicemen still face the brutal hazing that is a legacy of the Soviet military. In November 2019, a Russian soldier shot eight of his comrades to death at a Siberian military base. Private Ramil Shamsutdinov, a twenty-year-old draftee, complained that his officers threatened to have him beaten and raped, according to Shamsutdinov’s father.

During the Vietnam War, friendly doctors could be found to offer medical exemptions to potential American draftees (there are allegations that President Donald Trump benefited from such an arrangement). Russian authorities today are worried about for-profit websites that offer to help Russian conscripts evade service.

One official with the Main Military Prosecutor’s Office complained that “there has been an increase in the popularity of services that provide ‘legal advice’ to conscripts,” Moskovskij Komsomolets said. “In fact, they are engaged in fraud, receiving money for services that they obviously cannot provide.”

“As part of the fight against this kind of fraud, he said, military investigators work together with law enforcement agencies. The web is constantly searching for fraud websites in order to block them further.”

In addition, Russian men who have received a medical exemption are being re-examined. “About a thousand people who were previously deemed unfit for military service due to health reasons took the opportunity to undergo an examination again in the spring,” said the newspaper. “But only 75 of them joined the ranks of the Armed Forces and other military units.”

Still, most Russian men will never serve time in the ranks. Lieutenant General Evgeny Burdinsky, head of the General Staff’s Main Organizational and Mobilization Department, has said that 580,000 men were examined by military commissions for the spring 2019 draft. With only 135,000 called for service, less than one-quarter of them put on a uniform.

Meanwhile, there are calls for America to reinstitute the draft, a persistent battle cry since conscription was abolished in 1973. Critics worry that the all-volunteer military can’t attract sufficient numbers of qualified recruits. In 2018, the U.S. Army wanted 80,000 recruits but could only get 70,000. And that was only achieved by granting waivers—for criminal records, drug use and low test scores—for around 10 percent of enlistees.

Dennis Laich, a retired Army major general who is lobbying to bring back the draft, told a conference in November 2019 “that an estimated 4 million people turn age 18 each year. Of those, the Pentagon estimates about 30 percent can qualify for military service, giving the armed forces 1.2 million men and women to bring on board.”

“But only 180,000 of those 1.2 million are willing and able, Laich said. That leaves more than 1 million potential recruits on the table.”