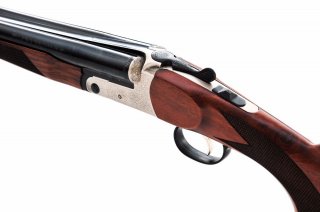 In the world of athletic competitions “silver” is traditionally awarded for second place, and few product manufacturers ever strive for anything but the “gold standard.” Both points are necessary to denote when discussing the Mossberg Silver Reserve II over/under shotgun—because simply put in its initial release it didn’t exactly take the hunting world by storm.

This over/under shotgun line was first introduced in 2011, and while Mossberg delivered a quality firearm at a reasonable price—something the company has been doing since it was founded in 1919—the Turkish-made Silver Reserve wasn't exactly what the market wanted and hunters didn't flock to it. Mossberg wisely listened to feedback from its customers, went back to the drawing board, and delivered a refined version of the shotgun, which by most accounts has solidly hit the mark.

The Silver Reserve II line has been expanded and includes both field and sporting models including the Field, Sport, Combo and Side-by-Side and these are available in four popular gauges including 12, 20, 28 gauges and .410 Bore; and with barrels ranging from 26 to 32 inches. There is also Bantam model for child-shooters and smaller-framed adults. Five Field choke tubes are provided with each of the shotguns, and these include cylinder, improved cylinder, modified, improved modified and full.

The Silver Reserve II features a standard box-lock design with robust double under lugs, and wraparound scroll engraving, while all the models have stocks made of “black walnut” with checkering diamonds that provide a good handhold. There is a solid black rubber recoil pad that will soften the recoil while the grip is ideally placed for most shooters. The shotguns feature a non-automatic safety that completely disconnects the trigger.

While the Silver Reserve II won't easily be confused with a Holland & Holland or other high-end over/under shotgun out there it is still a quality firearm that delivers in the key areas. It is reliable, rugged, accurate and most importantly it is affordable. It is easy to see how this was among the top-selling over/under shotguns earlier this year according to the NRA’s American Hunter.

All in all, this would be a great first firearm for those looking to get into the sport and while silver often goes to second place this is by no means simply a “runner up” shotgun even if it took a second try and a bit of refinement to get the Silver Reserve II to the finish line!