Munich Shows Us How the Elites Can Get It All Wrong 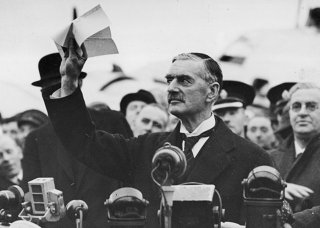 “History shows us,” the British historian Paul Johnson observed in his landmark book Modern Times, “the truly amazing extent to which intelligent, well-informed and resolute men, in the pursuit of economy or in an altruistic passion for disarmament, will delude themselves about realities.” Johnson was writing about appeasement, the Western policy of accommodating dictators like Adolf Hitler or Benito Mussolini to avoid war. And despite the efforts of a new revisionist film, Johnson’s observation still holds true.

Munich: The Edge of War is now streaming on Netflix and recently opened for a limited theatrical release. The movie is a fictionalized account of the 1938 Munich Conference, in which the British and the French, hoping to avert another world war, acquiesced to Hitler’s demands to dismember Czechoslovakia, and with it the post-World War I map of Europe. Academy Award winner Jeremy Irons offers a sympathetic portrayal of British prime minister Neville Chamberlain, who, along with the idea of appeasement itself, has been castigated by history.

Munich is part of an ongoing effort to rehabilitate both Chamberlain and appeasement, portraying both as more realist than is warranted. In fact, the failures of appeasement were made apparent less than a year after the conference when the Nazis invaded Poland, setting off World War II. Far from preventing war with concession after concession, the appeasers only encouraged Hitler’s ambitions.

Although, as the movie notes, Munich did briefly buy the British additional time to rearm, the policy of appeasement can only be labeled a failure. And it's worth recalling that it was, in many respects, a failure of the elites.

For much of the 1930s, appeasement was quite popular with huge swaths of the British public. The devastation wrought by both the Great War and the Great Depression had left a weary public and reduced defense budgets.

But the foremost champions of appeasement remained the British upper class, many of whom saw in fascism an antidote to the dangers of communism. Others were attracted to the seeming efficiency of Hitler’s Germany or Mussolini’s Italy where, the myth went, the trains were always on time.

Many in the British ruling class were content to overlook or underestimate the fascist threat. Worse still, some even sympathized with its ideological principles. One of the more egregious examples was Lord Lothian, who excused its antisemitism as “largely the reflex of the external persecution to which Germans had been subjected since the [First World] War.” Another arch-appeaser, Lord Londonderry, openly defended the antisemitism of the Nazi regime, declaring: “I have no great affection for the Jew … it is possible to trace their participation in most of the international disturbances which have created so much havoc in different countries.”

The British government, Tim Bouverie notes in Appeasement, “had been aware of the Nazi intention to build a military air force since the summer of 1933.” But for years it failed to act accordingly. The Air Ministry, Bouverie observes, “did not seem worried.”

Importantly, German rearmament actually predated the Nazis. It was enabled, in part, by the Soviets, and it was embodied in documents like the 1922 Treaty of Rapallo. Yet the British foreign secretary John Shaw told the House of Commons as late as 1932 that a well-armed France could provoke Germany. As Johnson noted, Britain continued pressuring France to reduce the size of its army even after Hitler took power. Far from seeing an armed France as an asset and credible deterrent, many seemed to see it as a provocation that could incite war.

As Johnson observed: “While terrified German socialists were being hunted through the streets by Goering’s Gestapo squads, their British comrades sought to howl down Churchill’s warning that Hitler had specifically stated in Mein Kampf that he would destroy France by securing British neutrality–but even the Führer had not counted on Britain seeking to prevent the French from defending themselves.”

The press was also key. When Chamberlain came back from Munich and proclaimed that he had secured “Peace with honor—Peace for our time,” many were ecstatic.

The Times, the historian David Faber has pointed out, “gushed” when it asserted that “no conqueror returning from a victory on the battlefield has come adorned with nobler laurels.” Indeed, many leading Western newspapers that advocated for appeasement also misread Hitler.

For example, the New York Times claimed in November 1922 that “Hitler’s anti-Semitism was not so genuine or violent as it sounded.” “He was,” the paper assured readers, “merely using anti-Semitic propaganda as a bait to catch masses of followers and keep them aroused, enthusiastic and in line for the time when his organization is perfected and sufficiently powerful to be employed effectively for political purposes.”

In addition to overlooking the core tenets of his ideology, many newspapers failed to grasp Hitler’s ambitions. After Hitler was released from a brief stay in prison for his role in the 1923 Munich Beer Hall Putsch, a New York Times headline read: “Hitler Tamed by Prison; Released on Parole, He is Expected to Return to Austria.” However, within nine years of that headline, Hitler would be the undisputed ruler of Germany, and within fourteen he would annex Austria into his fledgling empire.

Paul Johnson noted that there was “a general tendency to ignore the actual evidence of Hitler’s wickedness, which was plentiful enough, and to dismiss Hitler’s ferocious statements as ‘mere rhetoric,’ which was intended for ‘home consumption,’” as the Times put it in a July 10, 1934 report.

The British Broadcasting Corporation (BBC) was fully on board. As Bouverie documented, its Director General, John Reith, even asked the German foreign minister to assure Hitler that the “BBC was not anti-Nazi,” adding that “if they were to send his German opposite number over for a visit he would fly the swastika from the top of [the] Broadcasting House.” As the author Lynne Olson noted: “The BBC and most newspapers (with the notable exceptions of The Daily Telegraph and Manchester Guardian) consistently supported … efforts to negotiate with Germany and Italy, as well as” Prime Minister Neville Chamberlain’s “refusal to oppose their aggressions.” Indeed, “at most of the major papers, letters to the editor that were critical of the papers’ and governments pro-appeasement policy simply were not printed.”

This was by design. James Margach, a correspondent for the Sunday Times, would remark years later that “from the moment” that Chamberlain became premier “he sought to manipulate the press into supporting his policy of appeasing the dictators.” In her book Troublesome Young Men, Olson ably documents how Reith wielded the BBC against critics of appeasement—a policy that suited many in the ruling class just fine. In a 1937 meeting, the British foreign secretary Lord Halifax would agree with the Nazi propaganda minister Joseph Goebbels about the need to keep “the press in either country from making mischief.”

Even after the Nazi invasion of Poland and the British declaration of war, the British Foreign Office reportedly encouraged the New Statesman to print a demand for peace by the philosopher George Bernard Shaw. And “still determined not to anger the Germans,” Olson notes, “British officials urged the BBC and print media not to broadcast or print reports of the widespread Nazi killings of Jews.” Some critics of appeasement, like Harold Nicholson, suspected that the appeasers were still “playing for an arranged peace” in the initial phase of the war.

Nonetheless, as Johnson notes, enthusiasm for appeasement waned soon after Munich. That it was a failure—perhaps the greatest, and most consequential, Western foreign policy failure of the twentieth century—is inarguable. And to learn from it, we must reckon with the fact that some of its chief proponents were wealthy, well educated, well connected, and, in the final assessment, entirely wrong.