The Danger of Turning Russia Into a Pariah State 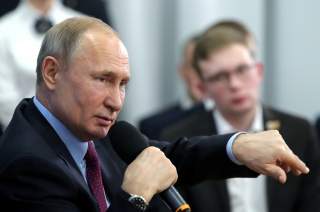 A generally overlooked and misunderstood turning point in the history of relations between Russia and the West occurred in April 1922 in the town of Rapallo, Italy. It was there, on the coast of the Ligurian Sea, that the Second Treaty of Rapallo was signed between the newly created entities of the Soviet Union and the German Republic. It would leave an indelible mark on the future of Europe.

To many, Rapallo is known for the secret cooperation agreement between the Red Army and the decimated German military machine which had bulldozed through Europe beginning in 1914. It is also known for the mutual renunciation of all territorial and financial claims between both countries which postdated the treaties of Brest-Litvosk and Versailles, the latter in which total blame was effectively cast at the feet of Germany. Yet while Versailles is often remembered within the context of the “stab in the back” theory propagated by Hitler in the ensuing decade, it was the Treaty of Rapallo, which was agreed to three years after Versailles, that had perhaps just as equal an impact in Germany during the interwar period.

As the statesmen George Kennan noted in his book Russia and the West, the strategic goal from the Soviet point of view at Rapallo was to splinter Germany from the Western allies in order to come to a separate diplomatic agreement. In accomplishing this goal, Soviet leadership could pursue its primary ideological objective of attempting to bring the Germans under the yoke of international communism. Specifically, the Soviet Comintern would commence its subversive activities through the infiltration of German socialist circles, while the Commissariat for Foreign Affairs would take advantage of its diplomatic privilege to support the activities of the proletariat revolutionaries within the country.

Thus, it was essentially through the collected vindictiveness of the Western allies in their attempt to diplomatically punish Germany at both Versailles and Genoa, that they unintentionally drove the Germans directly into the hands of the Soviets. As a result, the Treaty of Rapallo was the first diplomatic victory for the Soviet Union. Yet the larger lesson which may be gained from Rapallo, is that through the utter scorn for Germany’s role in the World War I and the unapologetic desire to punish them did the Western allies help provide the foundation for a violent, reactionary environment which would soon begin to build in the new Weimar Republic.

Nearly one hundred years later as we approach the 2020 U.S. presidential election, it would be wise to recall this episode of history. Both the annexation of Crimea and U.S. election interference perpetrated by Russian state actors in 2016 has resulted in sustained, reactionary calls over the past five years for the United States and its Western allies to “punish” Russia. This has effectively resulted in a series of multilateral economic sanctions on Russia that, in conjunction with a decline in oil prices, has had a direct impact on both Russian financial institutions and its energy sector and subsequently on the Russian citizen.

Yet the economic cost to Russia is only one component. Russia’s pariah status has also led to a possible reemergence of a China-Russia military alliance. In addition, the visceral reaction by the American left to the election of Donald Trump to the U.S. presidency has coalesced around traditional anti-Russian tendencies from U.S. neo-conservative circles to engender a revitalized cultural aversion towards Russia. As such, Russia continues to find itself on the outside of the international community looking in.

The questions that remain are intrinsically linked; what are the odds that Russia will continue to embrace its international pariah status after Vladimir Putin, and what does the future hold for Russian “sovereign democracy”? Much like one hundred years ago, this question must be considered within the context of how competing global ideologies—in this case, right-wing popular sovereignty and liberal internationalism—will continue to evolve over the next decade. While the prospects of Russia embracing a truly hyper-nationalistic, imperial agenda are remote, the opportunity to continue to isolate Russia further and thus widen the dividing lines between East and West is a likelihood.

As such, western European nations and Russia should continue to forage communal ties that have intrinsically linked them in a bond of European fellowship and commonality. As the noted Russian scholar, Martin Malia, described, this is in the form of the West-East European continuum in which shared bonds of a rich cultural and intellectual history takes precedence over post–Cold War resentments and regional, geopolitical isolationism. A European awakening needs to stir, in which the western nations rediscover the universal human influence of Dosotoevsky, Tolstoy, Turgenev, Gorky and others. Concurrently, Russia must seek to embrace a new tradition of commitment to universal rights and plurality, which has much of its foundation in the Western democratic influence on the country beginning in the nineteenth century, but which was lost in the totalitarianism of much of the twentieth.

Finally, in the United States, we must continue to reorient the lens through which we view Russia. This entails recognizing the fact that Russia does not pose a direct military threat towards us. This understanding was first articulated by George Kennan as far back as World War II, in which he clearly delineated a line between the ideological threat of the Soviet Union and Stalin at the time and the military threat of Hitler and Nazism. Accepting this as a reality will help to dampen prospects for a renewed military arms race between the two countries as well as the general anxiety with which certain U.S. policymakers capitalize on to embolden their constituencies. Secondly, we must refute the urge to accept a revisionist interpretation of the post-modern global order, namely the “bi-polar” concept pursued by Vladimir Putin in which the United States sits at one geopolitical “pole” and Russia the other. Caving into this over-simplistic idea of the world will only further a tendency towards naturally grouping Russia and China into an “axis of evil,” and in the process increase the likelihood of economic, military and diplomatic cooperation between them.

Aleks Zivic is Special Projects Assistant in the Office of the Dean at Case Western Reserve University in Cleveland, OH.