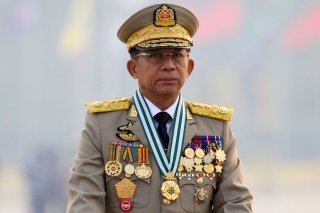 The ruling military junta of Myanmar (Burma) defended its decision to execute four political prisoners on Saturday, July 23, claiming that the former democracy activists had “deserved many death sentences” for their work.

Government spokesman Zaw Min Tun insisted on Tuesday that the defendants had been “given the right to defend themselves according to court procedure,” claiming during a press conference in Naypyidaw, Myanmar’s capital, that they had “committed crimes for which they should have been given death sentences many times.” “They harmed many innocent people,” he added. “There were many big losses which could not be replaced.”

Two of the four prisoners executed on Saturday—former lawmaker Phyo Zeya Thaw and pro-democracy activist Kyaw Min Yu, also known as “Ko Jimmy”—were convicted of murdering a woman suspected of being a spy for Myanmar’s military junta in Yangon. Zaw Min Tun claimed that both had been allowed to virtually meet with their families prior to the execution, although he did not provide further details.

The executions, which were announced on Monday, led to broad international condemnation. U.S. secretary of state Antony Blinken described them as a “reprehensible act … of violence and repression,” adding that they “would not be tolerated” and re-emphasizing Washington’s commitment to democracy in Myanmar.

The Association of Southeast Asian Nations (ASEAN), of which Myanmar remains a member, also condemned the executions, writing in a statement that it was “extremely troubled and deeply saddened” by the junta’s actions. Cambodia, which currently holds the organization’s rotating chair, claimed that the executions showed the junta’s “gross lack of will” to engage with ASEAN’s efforts to resolve Myanmar’s ongoing political crisis.

Malaysian foreign minister Saifuddin Abdullah claimed on his official Facebook page that the executions represented a “crime against humanity” and showed the junta’s lack of dedication to the Five-Point Consensus, a regional process intended to establish intra-party dialogue in Myanmar.

Protests against the execution were also held abroad, with hundreds of Thai citizens demonstrating outside Myanmar’s embassy in Bangkok.

Although the four executions marked Myanmar’s first known use of capital punishment since 1976, they could be the first of dozens, as many other anti-coup protesters have been sentenced to death following pro-democracy protests in the first weeks of Myanmar’s military rule. Thousands of other pro-democracy demonstrators have also been killed in ongoing clashes with the military, and tens of thousands have been arrested.