Nancy Pelosi and Steven Mnuchin Have a Coronavirus Relief Bill Ready. Will Trump Support it? 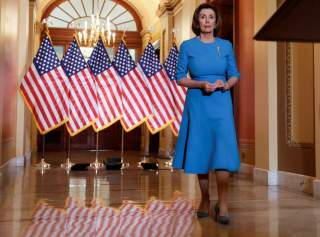 Congress is giving the impression that it is close to finalizing a bill to appropriate emergency relief to those whose lives will be affected by the coronavirus.

The deal was negotiated by Speaker of the House Nancy Pelosi and Secretary of the Treasury Steven Mnuchin, although there is still a question about Republican support. The final word on the deal is likely to come from President Donald Trump during his 3pm press conference today, where he is expected to declare a national emergency.

I think we’re very close to getting this done,” Mnuchin said this morning. “The president is absolutely committed that this will be an entire government effort.”

House Minority Leader Kevin McCarthy was present at the White House this morning, feeling out the president’s position on the bill, which was previously chilly. The bill as it stands includes measures to address paid family leave for those who cannot go to work, unemployment insurance for those who lose their jobs due to the virus, and increased funding to food stamps and other benefit programs. Previous qualms from congressional republicans have been resolved. The expected cost will be in the range of tens of billions of dollars.

The current sticking point seems to be the president’s proposal for a large payroll tax cut. The logic is that a substantial cut tax would reassure shaky investors in the stock market and keep the now fragile economy afloat. “If you want to get money into the hands of people quickly & efficiently, let them have the full money that they earned, APPROVE A PAYROLL TAX CUT until the end of the year, December 31. Then you are doing something that is really meaningful. Only that will make a big difference!” Trump tweeted this morning.

Democrats oppose the suggestion, which would potentially eliminate hundreds of billions of dollars from federal coffers. Even Republican legislators, like Senate Majority Leader Mitch McConnell, are not convinced about the tax cut. They consider the measure too broad and want aid relief to be much more focused.

Democrats, who support the bill in its current form, could pass it in the House of Representatives. Pelosi had preferred passage yesterday but acquiesced to another day of negotiations. But without the administration’s blessing, the House vote would likely be partisan, and the bill would subsequently fail in the Republican-majority senate. Legislators are under enormous public pressure (and expectation) to take some sort of action before next week’s scheduled recess (which McConnell has cancelled on the senate end). Pelosi said she expected a vote to take place “one way or another.”

The final fate of the bill will be known by 3pm.

Image: U.S. House Speaker Nancy Pelosi (D-CA) arrives to deliver a statement on a coronavirus economic aid package ahead of a vote in the House of Representatives on Capitol Hill in Washington, U.S., March 13, 2020. REUTERS/Yuri Gripas