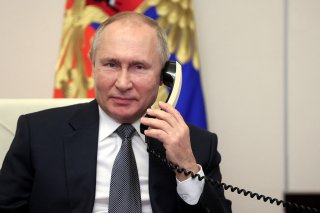 Jake Sullivan, President Joe Biden’s national security advisor, claimed at a talk on Friday that the United States was “prepared for dialogue” with Russia over the ongoing crisis along the Ukrainian border.

At the event, hosted by the Council on Foreign Relations, Sullivan told moderator Richard Haass, a former Bush administration official who has led the think tank since 2003, that the White House would seek to continue its diplomatic engagement with Russia, even as relations between the two sides have deteriorated. Sullivan underlined continuity in U.S. engagement with Russia, claiming that the two sides had a long history of engagement.

“We have been clear as the United States […] we’re prepared for dialogue with Russia,” Sullivan said. “We’ve had dialogue with Russia on European security issues for the last twenty years. We had it with the Soviet Union for decades before that. This has sometimes produced progress, sometimes produced a deadlock. But we’re fundamentally prepared for dialogue.”

During the talk, Sullivan addressed concerns that Vladimir Putin’s government intended to intervene in Ukraine, where an ongoing conflict between the Ukrainian military and pro-Russian rebels has taken place since 2014 in the country’s Donbass region. Russia has provided support to the rebels, and the buildup of Russian troops on the border opposite the region has led to worries that an invasion is imminent.

“The current assessment of the U.S. government is that [Putin] has not yet made a decision, so no change from last week to this week in that regard,” Sullivan told Haass.

However, Sullivan pointedly did not rule out the possibility of an invasion and acknowledged that the Russian government was planning one, even if their decision to execute that plan had not yet been made.

“The analysis from the intelligence community has laid out, to indicate that the Russian government is giving serious consideration and operational planning to such an exercise, is well validated,” Sullivan said.

His emphasis on continued engagement was not universally well-received.

“The US is ‘prepared for dialog with Russia’ while Putin is prepared to expand his war,” Kasparov wrote. “What dialog? About Ukraine? About Russia’s laughable ‘security concerns’?”

During a visit to Washington, Lithuanian Defense Minister Arvydas Anusauskas claimed that diplomacy was “no longer sufficient” to constrain Russia’s foreign policy, insisting that military support “should be provided not when aggression starts, but prior to that.”