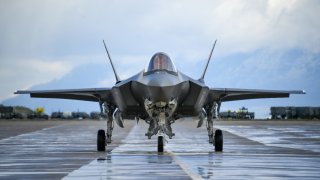 The Russian invasion of Ukraine has shaken the foundation of European security to its core and generated a host of sweeping future plans to expand, strengthen, and improve NATO.

In close coordination with NATO allies, the Pentagon will pre-position equipment, pursue “scalable” forward formations, streamline multinational command and control, and emphasize rapid deployment ability to respond to future contingencies. It is increasingly becoming clear that tomorrow’s NATO will be quite different in scope and tactical ability.

The future configuration of NATO’s forward posture has yet to be determined and will likely be a large focus of discussions at the upcoming NATO summit in Madrid, Spain. However, it would be entirely reasonable to expect that the alliance’s forward presence will expand as well, with a special emphasis on rapid deployment. Austin said elements of NATO’s Response Force have already been deployed.

“Our Allies have activated NATO's defense plans. They've deployed elements of the NATO Response Force and they've placed tens of thousands of troops in the eastern areas of the Alliance, along with significant air and naval assets under the direct command of NATO and supported by Allies' national deployments,” Austin said.

There are several additional elements to this, including a possible scale-up in the Baltics to deter any possible Russian invasion. In recent years, think tanks such as the RAND Corporation have raised concerns that the Baltics could be vulnerable to being quickly overrun by invading Russian forces.

However, that concern was voiced years ago, well before the world observed Russia’s surprisingly poor performance in Ukraine. Nonetheless, it seems entirely realistic that additional forces or forward-positioned assets such as the F-35 stealth fighter might enhance deterrence in the region.

Any deterrence posture on NATO’s eastern flank will likely include several key elements, including a sizable armored mechanized component, ballistic missile defense, and fifth-generation stealth aircraft. Poland, for example, is now receiving a new order of US-built export variants of the U.S. Army’s Abrams main battle tank, and Poland has also become an F-35 stealth fighter customer. The combination of heavy armor and fifth-generation air power might be sufficient to prevent Putin from attacking NATO in eastern Europe.

Operating in close proximity to the Russian border, Polish or Finish F-35s would be in a position to destroy Russian air defenses, as well as long-and-intermediate-range ballistic missile launchers. Russian rocket launchers, many of them mobile, would likely be vulnerable to attacks from fifth-generation stealth aircraft such as F-35s and F-22s.