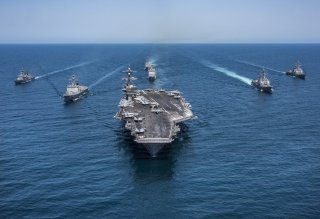 NATO has kicked off large-scale exercises in the Mediterranean amid spiraling military tensions with Russia.

NATO allies have launched Neptune Strike '22, a twelve-day series of exercises in the Mediterranean Sea. "This exercise will help demonstrate the unity, capability, and strength of the transatlantic alliance,” said White House press secretary Jen Psaki, according to CBS News. U.S. Secretary of Defense Lloyd Austin said that the drills are intended to reassure Washington’s European allies.

The Defense Department announced that the USS Harry S. Truman Nimitz-class aircraft carrier, along with its respective carrier strike group and carrier air wing, will be the U.S. military's “primary contribution” to the exercises. The eighth Nimitz-class carrier, the USS Harry S. Truman was laid down in 1993 and commissioned in 1998. "[Neptune Strike '22] is designed to demonstrate NATO's ability to integrate the high-end maritime strike capabilities of an aircraft carrier strike group to support the deterrence and defense of the alliance," Pentagon spokesman John Kirby told reporters. "The USS Harry S. Truman carrier strike group will be placed under NATO operational control and serve as the centerpiece for this long-planned activity that fosters NATO allies' ability to cooperate and integrate effectively."

NATO spokeswoman Oana Lungescu said the exercises marked the first time since the Cold War that a U.S. aircraft carrier came under NATO joint command. "We have a U.S. aircraft carrier group under NATO command—that is not in the Baltic Sea—but of course, it matters for the security of Europe, so we have stepped up," said NATO chief Jens Stoltenberg at a press conference on Monday. Stoltenberg added that the drills are purely defensive and that “NATO is not threatening Russia.”

Kirby said the Neptune Strike '22 exercises have been in the works since 2020 and are “not designed against the kinds of scenarios that might happen with respect to Ukraine.” Kirby added that the event "really is a NATO maritime exercise to test … a wide range of maritime capabilities that we want to make sure we continue to improve."

The alliance’s Mediterranean drills come amid spiraling military tensions between Russia and NATO over Ukraine, with Western governments and military experts warning that the Russian forces arrayed along Ukraine’s eastern border are poised to strike at any moment. The Kremlin has denied any plans to invade Ukraine and has accused the West of responding with “hysteria.”

Last week, Russia’s Defense Ministry announced its own set of sweeping maritime drills with the Iranian and Chinese navies. Dubbed CHIRU-2022, the exercise was held in the Gulf of Oman and involved a total of fourteen warships and support vessels.