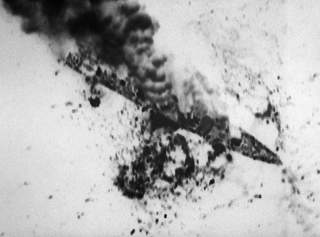 Following the mining of the U.S. frigate Samuel B. Roberts on April 14, 1988, the Reagan administration ordered a retaliatory strike to bloody the nose of Iranian naval forces—without tipping over into full-out war.

As described in the first half of this two-part series, in Operation Praying Mantis, Navy surface-action groups Bravo and Charlie proceeded to dispatch two Iranian oil platforms with ease early on the morning of April 18 and then sunk the Iranian missile boat Joshan when she came to investigate.

But SAG Delta—counting the destroyers Joseph Williams and O’Brian, and the frigate Jack Williams— had yet to complete it mission: to sink the Iranian Saam-class frigate Sabalan, notorious for its unusually bloody attacks on civilian shipping using its 4.5” gun and Sea Killer missiles. Soon aircraft from the carrier USS Enterprise were busily searching for the frigate.

But by that afternoon, Tehran made it clear it was not going to take the U.S. assault lying down.

Years later, former Revolutionary Guard Corps chief Mohsen Rezaee recalled being “shocked” by Ayatollah Khomeini’s blithe order to retaliate: “If I were you, I would take a rocket-propelled grenade and I would hit them.”

First, at 12:50, two Iranian F-4 Phantom fighters came barreling towards SAG Charlie. The old Charles F. Adams-class destroyer Lynde McCormick locked on with her radar and fired two long-range SM-2 missiles. The first tore half the wing off one of the Phantoms and raked its fuselage with shrapnel. Miraculously, the pilot retained enough control to dodge the second missile, and both Phantoms belted back to their base in Bandar Abbas.

Marine Sea Cobra and Navy Sea Sprite helicopters exchanged fire with some of the boats. Then the USS Enterprise scrambled A-6E Intruder jets to come to Scan Bay’s distress call, having received permission from Reagan to intervene.

One of the attack planes released a Rockeye cluster bomb over the motorboats—carpeting them with 247 one-pound bomblets. Surviving motorboats raced to Al Musa island, where their crews ran the boats aground and fled. Altogether, three motorboats were sunk in various actions that day.

Finally, at 3:30 an Iranian Saam-class frigate slipped from her quay in the Iranian naval base of Bandar Abbas—on course to launch an attack on the UAE’s Saleh oil field.

She was detected leaving the harbor on radar by an A-6E jet from attack squadron VA-95—fully loaded with a ship-busting “War at Sea” weapons package.

Positive identification was mandatory. I made the decision to fly close aboard the ship to visually ID it even though we would be vulnerable to attack. I put the A-6 in steep dive five miles astern of the target ship leveling out below 100 feet elevation at 500 knots. As we approached about a mile astern, the ship opened up with AAA [anti-aircraft artillery] and possibly shoulder-fired anti-aircraft missiles or rocket-propelled grenades.

We went by the ship’s port side at deck level which had Sabalan’s number on its hull. Bright AAA muzzle flashes and tracers passed behind us as the Iranian gunners failed to lead their shots.

We egressed out twenty miles, called the E-2 [radar plane] on positive ID and told them to pass to the Enterprise: ‘launch the Strike Group.’ I then came up UHF Guard channel and told the Sabalan that they had five minutes to abandon ship because I was going to sink them.

We watched the Harpoon skim low on the water and impact the frigate behind the bridge. Fire and billowing black smoke came from the explosion and the ship went dead in the water. We made another attack run with four Skipper rocket-assisted [1,000 pound] bombs and a laser-guided bomb.

Soon six nimbler A-7 Corsair jets and another Harpoon-armed A-6E from the Enterprise screamed into the fight at full throttle, armed with older Walleye 250-pound bombs manually steered to target using a television uplink.

One Walleye hit the front gun turret in a massive explosion, knocking it partially off the deck. Subsequent hits put the ship further ablaze as the remaining four A-7s rolled in with their strings of 500-pound bombs. The ship remained on fire and listed heavily but did not sink as the attack ended and the strike group egressed.

Even SAG Delta joined the fight, as the destroyer Joseph Strauss hit the vessel with a third Harpoon. The crew abandoned the blazing frigate (photo here) as it drifted dead in the water. Hours later, her magazine detonated, with the ship to bottom with 45 of her roughly 140 crew.

But ironically, the 1,500-ton frigate—the largest vessel sunk in battle by the U.S. Navy since World War II—was not the Sabalan, but her sistership Sahand with which she had recently exchanged hull numbers.

Captain Abdollah Manavi’s infamous frigate still lay in port at Bandar Abbas—and at 5 PM, she slipped from her quay bent on revenge.

An orbiting Intruder swiftly detected Sabalan—and was detected by her. The frigate launched three surface-to-air missiles at the Intruder. All missed, and the jet promptly retaliated by dropping a 500-pound laser-guided bomb directly into the ship’s stack. The stricken frigate came to a stop, stern drooping into the water.

The crippled Sabalan was now defenseless and the Intruder pilot asked permission to engage in a second attack run. But an unlikely angel came to Sabalan’s rescue.

The Joint Chiefs of Staff had been monitoring the engagement throughout the day. When the request came in to finish off Sabalan, Admiral William Crowe told Secretary of Defense Secretary Frank Carlucci “Sir, I think we’ve shed enough blood today.”

They did not want to inflict so much damage as to entangle the U.S. in a prolonged war.

A tug eventually towed the immobilized Sablan back into port. Tehran briefly feared that the U.S. had decided to team up with Iraq to invade Iran.

Later that evening, sailors in SAG Delta reported that Iranian land-based anti-ship batteries had fired multiple missiles at them, but these reports were never confirmed. One Chinese-built Silkworm was definitely fired at the frigate USS Gary as she traversed the Straits of Hormuz, but was apparently blasted out of the sky by her 3” deck gun.

The Pentagon hushed up the reported attacks, which might have created undesired pressure on Washington to follow through on threats to strike Iran’s land-based missile sites.

As Tehran reeled from concurrent Iraqi ground offensives, the Iran-Iraq war came to an end a few months later.

Operation Praying Mantis was the largest naval battle fought by the U.S. Navy since World War II. The fundamentally lop-sided engagement was made more so by the superior situational awareness offered by U.S. airplanes and helicopters, and Iran’s piecemeal commitment of its few, valuable warships.

As for the Sabalan, she was repaired and sails still with the Iranian Navy today, now refitted with Chinese anti-ship missiles. In 2014, Tehran proclaimed she would even perform a cruise of the East Coast of the United States, but didn’t follow through.