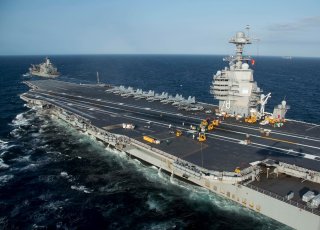 U.S. Navy F/A-18E/F Super Hornets, E-2D Hawkeyes, and MH-60S Nighthawks took off from the carrier’s flight deck during the certification process. The aircraft, part of Carrier Air Wing 8, conducted more than 400 catapult launches and recoveries during daytime and the night.

The “Ford and Carrier Air Wing 8 were meticulous during the whole certification evolution,” said Senior Chief AB Carl Higdon, the leading chief petty officer of the Navy’s air department. “Every Sailor aboard contributed to our success of the mission. I’m really proud to be a part of this team.”

The flight deck certification is a major milestone for the USS Gerald R. Ford. The carrier is the first in the Navy to debut a new Electromagnetic Aircraft Launching System (EMALS) and Advanced Arresting Gear (AAG).

The system replaces the Navy’s legacy steam-powered catapult system and is supposed to increase launch and recovery rates. However, the system has experienced significant problems and was not as reliable as the system it replaced.

“We have more tests and evaluations to complete during our next underway periods, and I have no doubt that our Sailors will rise to the challenge and accomplish the mission.”

The USS Ford has also experienced problems with the internal elevators that shuttle aircraft and ammunition throughout the ship’s hull. The Navy now says that elevator issues have been rectified, though it remains to be seen if that is entirely the case.

“We put our first-in-class warship to the test and our crew delivered,” Capt. Lanzilotta explained. “From the air controllers and flight deck crews, to the catapult and arresting gear teams, our crew showed a level of professionalism that enabled a successful air wing integration with Carrier Air Wing 8.”

“The best part, I think, is seeing our teammates from Carrier Air Wing 8 come aboard and fit right in with our enthusiastic and motivated approach to getting the job done. I look forward to seeing what we can do together in the coming months.”

The USS Ford will be underway again later this month for additional certification procedures and is scheduled for its first deployment later this year.