Navy and Marines at Odds Over the Light Amphibious Warship 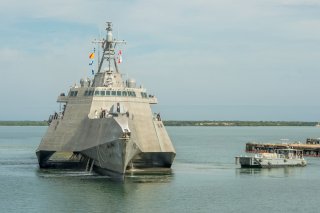 The U.S. Marine Corps and the U.S. Navy are at loggerheads over the future of the Light Amphibious Warship. The vessel will form the cornerstone of the Marine Corps’ Expeditionary Advanced Base Operations.

The operating concept is still in its infancy, but it will see small groups of highly distributed and semi-independent Marines flitting throughout the Pacific, denying the enemy the use of important land areas, choking off maritime bottlenecks, and, in some cases, hunting down and sinking enemy ships and submarines.

Though the Marine Corps would like to have up to thirty-five ships, the U.S. Navy has indicated that the Corps should make do with just eighteen.

One of the main points of contention is the ship’s cost and survivability. The Marine Corps would like a lower base price of approximately $150 million. At this price point, more vessels could be purchased. The Navy, however, would like to see a unit price of $300 million, which could offer a more robust, more heavily armored, and more survivable ship.

The U.S. Navy also has bitter memories of its Littoral Combat Ship. This ship has been wildly expensive and plagued with problems. The Littoral Combat Ships were not designed from the outset to be as survivable as their larger naval counterparts and may be part of the impetuous for the Navy’s survivability priority.

Dakota Wood, a senior fellow at the Heritage Foundation and a retired Marine, explained that the Marine Corps and the Navy simply have different equations at play when assessing risk—leading to very different risk tolerance levels.

“It would reveal the two different perspectives on risk. You put a Marine unit on the ground, they have to engage with an enemy in close combat. I mean, you just have to do that. And so there is a service culture that says we’re going to assess the risk,” he said.

“We’re going to do everything we can to mitigate that risk—to lessen it—but you cannot eliminate it and it just comes with the territory of ground combat that you are going to lose people,” Wood said to USNI News.

“On the Navy side, they have a relatively small number of ships—and relative meaning relative to task, the size of the world, how many ships you have in the water and all that stuff—so each one of those things represents a fairly significant percentage of naval power,” he explained.

“You lose a ship, it’s a billion dollar plus investment, all the sailors aboard that ship. And so the Navy hasn’t had to operate truly in a threat environment for a very long time,” Wood concluded.