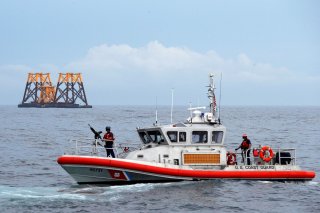 At the annual Surface Navy Association Symposium, the commandant of the Coast Guard, Admiral Karl Schultz, gave the keynote address.

During the speech, Schultz highlighted the high building tempo the Coast Guard is able to sustain, explaining that the service’s tenth new ship will be christened sometime this spring.

"You know, as we await the delivery of these ships, every one of those 64 cutters was named for a former Coast Guard hero,” he explained. “It’s really been insightful as an organization to look into our own history as we went out and did some research.”

"I think we really play a key role in shaping the diction of global maritime security, global maritime safety, and I suspect navies around the world are recognizing that the language and purpose of coast guards are well supported to their interests and their sovereign interests. And that’s why we’re adapting our operations abroad,” Schultz said.

Though a separate service branch, Coast Guard ships can perform low-intensity missions on behalf of the Navy, freeing up better armed and better-protected ships for other locales.

In 2020 ,the Navy, Marine Corps, and Coast Guard signed the 2020 Tri-Service Marine Strategy to refocus the branches’ domains: the Navy on control of the sea, the Marine Corps on expeditionary amphibious assault, and the Coast Guard on expanding its presence across the world.

The Coast Guard also operates the nation’s ice breakers—highly specialized platforms that are increasingly seen as very important for American interests in the Arctic.

Icebreakers “enable the U.S. to maintain defense readiness in the Arctic and Antarctic regions; enforce treaties and other laws needed to safeguard both industry and the environment,” the Coast Guard explains.

Given ice breakers’ growing importance, it is logical that the United States will grow its fleet. The United States is in the process of building a heavy icebreaker—one of the first new ice-breaking ships in at least twenty years.