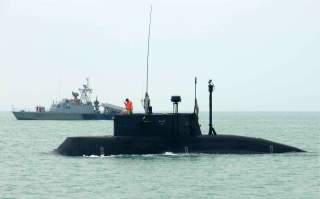 The U.S. Navy wants a robot boat that can sail 4,500 miles without a human at the helm.

The Navy isn't saying what the Medium Unmanned Surface Vehicle will be used for. But the requirements specified in a FedBizOpps announcement sound very much like a DARPA/Navy program to develop a robot vessel that can detect and stalk diesel submarines.

The Naval Sea Systems Command (NAVSEA) notice on FedBizOpps queries whether "sources exist that are capable of satisfying the Navy's anticipated program requirement for independently deploying Medium Unmanned Surface Vehicles (MUSVs). MUSVs are defined as vessels between 12 and 50 meters [39 to 164 feet] in length. NAVSEA is taking an accelerated approach with industry to leverage existing, manned or unmanned surface ship designs that can be designed and/or modified to rapidly deliver an unmanned surface ship capability."

The Navy says the key attributes of a MUSV design must be "extended vessel range and cruising speed, and high reliability." But the NAVSEA notice lists more specific requirements:

- Stable enough to operate its onboard payloads in Sea State 4 conditions (4- to 8-foot waves).

- Can stay at sea for 60 to 90 days without maintenance by human sailors.

- Enough desk space to carry one standard 40-foot shipping container and one 20-foot container. Interestingly, while the NAVSEA notice does not specify MUSV's purpose, it does say that "Threshold [minimum] is 180 degree field of view from each container, while Objective [desired] is 270 degree field of view." This suggests that the shipping containers represent some kind of sensor. The Navy also wants space for numerous communications antennas, including an antenna for which is the U.S. and NATO's standard network for sharing tactical data, such as the position of enemy ships.

- "The vessel has no self-defense requirements,” according to the Navy. “Cameras should provide complete coverage so remote oversight personnel are aware of any boarding attempt." This suggests that if the vessel is intended for combat situations, it will be against opponents -- such as submarines in the open sea -- that aren't in a position to mount boarding actions.

- Can maneuver autonomously while complying with the International Regulations for Prevention of Collisions at Sea, or COLREGS, that govern issues such as which ship has right of way when passing each other.

The MUSV requirements are fairly similar to DARPA's ACTUV robot submarine hunter, which has now been turned over to the Navy's Office of Naval Research as the Sea Hunter program.

Sea Hunter is a 132-foot-long vessel with a speed of 27 knots, though at 10,000 miles, its range appears far longer than MUSV. Equipped with a towed sonar array, Sea Hunter is a demonstration project of an autonomous long-range and long-endurance vessel that has both sensors to detect quiet diesel-powered submarines, and the endurance to track those subs for days until manned anti-submarine forces show up for the kill.

When queried by TNI about similarities between MUSV and Sea Hunter, NAVSEA spokesman Alan Baribeau would only say that "the FBO announcement purely seeks information for market research purposes only. The government regularly reaches out to industry for information to stay abreast of current practices. To draw a comparison between the two efforts as actual programs of record would be premature."

Either way, unmanned submarine hunters are coming. Delegating sub-stalking to unmanned craft frees up manned assets, such as patrol aircraft and ships, for other tasks. Perhaps the biggest obstacle to autonomous ships has been the need for Artificial Intelligence that can comply with COLREGS, because mariners dislike the thought of robot ships running amok in crowded waterways. But if that can be solved, the slow, painstaking nature of anti-submarine warfare is perfect for machines that don't get bored or impatient.