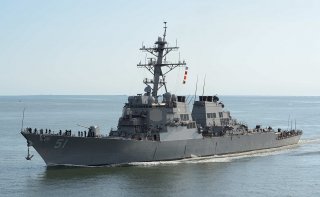 First entering service thirty years ago in 1991, the Arleigh Burke-class guided-missile destroyers (DDGs) have the distinction of having the longest production run for any post–World War II U.S. Navy surface combatant. Sixty-eight of the warships have been completed and are in active service while seven are currently under construction with another three on order.

As of April of last year, the Navy has announced plans to build a total of eighty-nine of the warships, and since the decommissioning of the last Spruance-class destroyer, USS Cushing (DD-985), on September 21, 2005—the Arleigh Burke-class were the only active U.S. Navy destroyers until USS Zumwalt (DDG-1000) entered service in October 2016.

The vessels are among the largest destroyers built for the United States Navy, while the hull form was designed to permit high speeds. The design also featured various stealth techniques including the use of angled rather than traditional vertical surfaces and tripod mainmast, which creates a low radar cross-section—making it more difficult for the warships to be targeted by anti-ship missiles. The ship also utilizes an electronic warfare suite that can provide passive detection and decoy countermeasures.

The Arleigh Burke-class destroyers are equipped with an Aegis combat system that integrates the ship’s sensors and weapon systems to engage anti-ship missile threats; while the Aegis system has a federated architecture with four subsystems, AN / SPY-1 multifunction radar, a command and decision system (CDS), an Aegis display system (ADS), and the weapon control system (WCS).

With an overall length of 505 to 509.5 feet (153.9 to 155.3 m), and a displacement ranging from 8,230 to 9,700 tons, the Arleigh Burke-class vessels are larger, and with weaponry including more than ninety missiles, are also more heavily armed than most previous ships classified as guided missile cruisers.

The entirety of the ship, except the two aluminum funnels, is made from steel with vital areas protected by two layers of steel and seventy tons of Kevlar armor.

The initial twenty-one destroyers in the class, DDG-51 to DDG-71, are categorized as Flight I; while the next seven, DDG-72 to DDG-78 are Flight II; followed by revised Flight IIA ships.

USS Michael Murphy (DDG-112) was meant to be the last of the sixty-two of the Arleigh Burke-class, but after the cancelation of the Zumwalt-class program, the Navy instead opted instead to fill the role with a Flight III series of Arleigh Burke guided-missile destroyers. Improvements over the previous flights included the addition of hangers for two SH-60B/F LAMPS helicopters, new combat system software and an enlarged flight deck. Additionally, the Flight III models are armed with Evolved Sea Sparrow Missiles, and feature Kingfisher mine detection sonar, Kollmorgen optronic sight and an upgraded Aegis radar system.

In September 2018, the U.S. Navy awarded two contracts with a combined value of $9.29 billion to Huntington Ingalls Industries (HII) and Bath Iron Works (BIW) for the construction of ten Flight III DDG 51 destroyers. HII was contracted to build six of the destroyers, while BIW, will construct the remaining four. Construction of the ships is set to take place between 2018 and 2022. Additionally, in December 2018, the U.S. Navy awarded a contract modification to BIW to construct an additional Arleigh Burke-class destroyer.