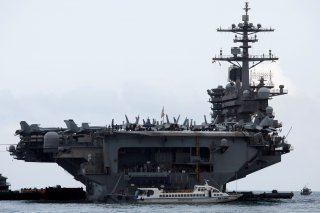 The media-fed conflagration surrounding the removal of U.S. Navy Captain Brett Crozier as commander of the U.S.S. Theodore Roosevelt (CVN-72) has finally claimed its intended scalp: Acting Secretary of the Navy Thomas B. Modly resigned yesterday afternoon, after meeting with Secretary of Defense Mark Esper. Modly had made the decision to relieve Crozier of command on Thursday, April 2; on Friday, virally-spread video footage of the crew of the ship known as the Big Stick depicted wild and raucous cheering in support of Crozier, as their departing commanding officer exited the gangway for the last time. This set in motion the Beltway chattering classes’ screams for Modly’s scalp, and these were unabated over the weekend even as first President Trump, and then Secretary Esper on CNN Sunday morning voiced support for Acting Secretary Modly.

Alas, Mr. Modly’s remarks aboard the Roosevelt Monday morning, where he’d traveled to talk to the crew directly about the change in command, went over poorly, even as they were candid and heartfelt. But in giving the crew the detailed background to the events leading to the change in command, Modly criticized Captain Crozier harshly while questioning his judgment; these remarks were audiotaped and released to the media by mid-day Monday, igniting a firestorm calling for Modly’s immediate removal from office. A wide variety of critics, including Democratic officeholders in both the House and Senate, media personalities across the political spectrum [e.g., Bill Kristol and Rachel Maddow], and former senior officers in the armed forces [e.g., U.S. Army 4-star Barry McCaffrey] all demanded Modly’s ouster.

Given the departure of the acting secretary, arguing the “balls and strikes” of “L’Affaire Theodore Roosevelt” may seem moot. But as any close observer of naval affairs can affirm regarding, in particular, the disposition of the U.S. fleet, this episode demonstrates once again a bad outcome for the forgotten men and women who answer to the appellation of “American Taxpayer” – borne of errant knowledge or willful politically-motivated misinformation, and due solely to the bonfires created by the media and their acolytes in the arrogant and often corrupt Beltway/Manhattan ruling class.

A review of the facts here offers some valuable lessons about leadership – or its lack thereof – via an affair that, sadly, is all too typical in modern Washington. (Full disclosure: I have known Mr. Modly for more than 25 years, and as a former work colleague with deep knowledge of his personal integrity, professional competence, and most importantly, reverential love for the United States Navy and its extended family, I am a strong defender of his decision to relieve the commander of the Roosevelt; I say this having considered detailed facts of the case that most critics have blatantly ignored. I also am very hopeful Captain Crozier sees a repassage to his career in the Navy, something former Acting SECNAV Modly very much wanted as well.). Here are the relevant facts of the case, including details the screaming Beltway critics ignored in their rush to judgment:

The publication of Crozier’s plea for help was, as Secretary Modly pointed out, predictable in this digital communications age, but it caught the Navy brass by surprise, both in form and substance (e.g., the letter was not addressed to anyone, and contained no detailed specific action plan or insights into what about the Navy's surge of resources wasn't going well). Most pointedly, Crozier's missive did not at all "square" with the CO not talking to Admiral Baker, berthed within feet of him on the Roosevelt, at all about this, nor with the previous days' communications with Secretary Modly's staff that included availability of a direct line to Modly. Predictably though, the story made national news immediately, and among other things caused concern and consternation for the families of the Roosevelt’s crew, as well as deflating morale among the crew themselves. Infections by then had hit around 100 and were sure to grow (there are now 230 infected including Captain Crozier himself, though none hospitalized, and more than 2000 Roosevelt sailors are isolated in hotels on Guam).

Modly talked to Captain Crozier directly on Wednesday, April 1, and Crozier admitted he had avoided Admiral Baker or his other communication options [again, including the highly unusual opportunity to call Secretary Modly directly, 24/7, for anything needed, and again, having shown no outsized concern to Mr. Love on the phone within hours of emailing out his letter to a broad audience in an unsecured manner]. Crozier reiterated to Modly only that he felt the situation was urgent and did not want to be told to not send out his “distress flare.”

Here's the moment when leaders must make tough decisions: Modly, considering [a] the sequence of events and the distress caused, [b] the lack of forthrightness from Crozier, either with Admiral Baker, or Messrs. Love or Modly themselves and [c] the consequences of Crozier's strange choice for his communication of a warning, given other considerable options, relieved Crozier of command the next day, on Thursday, April 2nd.  That afternoon Modly gave a detailed press conference explaining his actions, showing unusual candor but also praising the stellar career of Captain Crozier, a decorated naval aviator and combat veteran. The Acting SECNAV also emphasized that in no way was Captain Crozier's career over and that he believed in redemption; he just felt that in this extreme situation of COVID-19, a steadier hand was needed aboard the Roosevelt.

On Friday, April 3rd, the viral video of Captain Crozier leaving the Roosevelt amidst a thunderous ovation from a loyal and appreciative crew set off intense criticism of the Navy's handling of the COVID-19 outbreak on the carrier. Modly’s speech aboard the ship on Monday, April 6th, which included explicit criticism of Captain Crozier, was also leaked to the media, and only intensified the negative reviews of the Navy’s handling of the affair by the Beltway chattering classes. On Monday night, President Trump said he was now going to get personally involved as it sounded "like a dispute between two good people." Secretary Modly, in turn, issued an apology for the harshness of his remarks on Monday morning aboard the Roosevelt, and he again praised Captain Crozier and his concern for his crew, but by yesterday afternoon SecDef Esper had Modly’s resignation in hand.