The Navy Plans to Have 66 Littoral Combat Ship Crews in 5 Years. What Could Go Wrong? 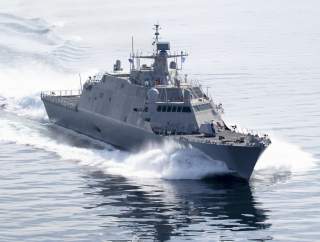 The U.S. Navy is trying hard to deploy more of its Littoral Combat Ships (LCS), aiming finally to make use of a controversial class of vessel that has suffered a long series of conceptual, design and mechanical failures.

Vice Adm. Richard Brown told USNI News reporter Megan Eckstein that the Navy within five years could have nearly as many deployable LCS crews (66) as it does deployable destroyer crews (68).

“While the LCS program won’t rival [destroyers] in terms of percentage of manpower – the LCS has a much smaller crew – the LCS’s much higher operational availability means it’s conceivable that as many LCSs may be on deployments as destroyers at any given time,” Eckstein wrote.

Any one of the Navy’s planned LCSs, in theory, could remain forward-deployed for two years at a time while separate crews rotate on and off the ship. The Navy’s destroyers each have just one crew.

As conceived in the late 1990s, the LCS was supposed to be cheap, fast, flexible and easy to build. But after spending $30 billion over a period of around two decades, the Navy has managed to acquire just 38 of the 3,000-ton-displacement vessels.

As of late 2019, the Navy has received 19 of the LCSs, divided roughly evenly between two variants -- the triple-hull Independence type and the monohull Freedom type. Four of the class are test ships. Six are training vessels. In 2019 nine LCSs, in theory, are deployable.

But few ever have deployed. Indeed, the Navy in 2018 didn’t deploy a single LCS, USNI News reported.

“USS Freedom (LCS-1) deployed once in 2013,” Eckstein noted. “USS Fort Worth (LCS-3) deployed in late 2014 and suffered a propulsion system failure in early 2016, sidelining the ship for the final stretch of its planned 16-month deployment. USS Coronado (LCS-4) deployed in 2016, suffering an early engineering casualty that forced repairs in Hawaii but then operating for about 14 months out of Singapore. USS Independence (LCS-2) never conducted an overseas deployment and likely never will, under the current deployment model.”

The deployment rate is improving. “USS Montgomery (LCS-8) is deployed in the Western Pacific today,” Eckstein wrote. “A second Independence-variant hull, USS Gabrielle Giffords (LCS-10), is set to deploy later this fall, from San Diego to [the Western Pacific] like its sister ship. Freedom-variant USS Detroit (LCS-7) will deploy from Mayport, Fla., later this year to U.S. Southern Command, and USS Little Rock (LCS-9) is also working up for the next deployment from Florida.”

“The Littoral Combat Ship program has been unnecessarily complicated from the beginning,” the Project on Government Oversight (POGO) explained in 2016. “Initially the Navy aimed for each ship to cost $220 million, but the Government Accountability Office estimates procurement costs for the first 32 ships is currently about $21 billion, or about $655 million per ship—nearly triple what they were supposed to cost.”

It took the Navy nearly two decades to realize the LCS program had failed. The sailing branch in 2014 cut LCS acquisition from 55 ships to 32. Congress eventually added six vessels, boosting the class to 38 ships.

In place of the canceled LCSs, the Navy plans to buy 20 new missile frigates. The service in 2019 asked Congress for around $1 billion for the first ship in the new class.