Navy Refines and Integrates Weapons on Its New Frigate 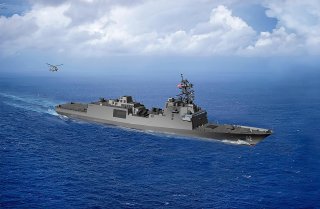 The U.S. Navy is massively arming its first Constellation-class frigate as part of an ambitious and high-op-tempo move to deliver as many as fifteen of the new ships within the next five years.

“Bridge design is something we are going after right now,” Capt. Kevin Smith, the program manager of the Constellation-class frigate, said at the Navy League’s 2021 Sea Air Space symposium. “If you walk on a [DDG 51 Destroyer] bridge, it is cluttered with a lot going on up there. We want to have a very clean bridge, kind of like an [littoral combat ship] but more of a Fincantieri design where you have a functional display. The watch sailor needs to look out the window and drive the ship.”

A cleaner, less cluttered bridge area can support unobstructed command and control for the ship including key functions such as navigation, targeting or even weapons employment.

Prioritizing functionality and ease of use for bridge commanders, Smith explained that sailors on watch need an “interface system and a ship control system that is understood.” To make this happen, he added, Navy frigate developers are integrating a commonly used system called Ship Control System Government which is now on many amphibious assault ships and carriers. The new standard interface will also go on DDG 51 Arleigh Burke-class destroyers.

Smith also explained that much of the development is taking place through advanced computer simulations and modeling to design key aspects of ship technologies, hull configurations and internal spaces for the ship.

“High-fidelity” simulations were used to assess and refine specs for various systems and technologies to be integrated into the ship. One key area, Smith explained, was replicating Raytheon’s EASR radar performance through simulation, to ensure the highest level of functionality and performance.

“With high-fidelity simulation, we are burning down all the risk that we can with Aegis integration in the Frigate with the EASR radar,” Smith explained.

As a variant within Raytheon’s AN/SPY-6  family of radars, the EASR is scaled to perform missions specific to the Frigate. Raytheon developers explain that SPY-6 radars are scalable by design, to adjust or tailor the number of Radar Module Assemblies (RMA) needed to meet mission demands. RMAs, two-foot x two-foot x two-foot blocks, can be configured for different ships and tailored for a particular mission scope, enabling different SPY-6 variants to perform high-value air defenses across the Navy fleet. Carriers and amphibious assault ships, for example, need different kinds of air surveillance and defense when compared with destroyers, which need the most capable air and missile defense radar systems. Smith explained that, unlike the thirty-seven RMAs on the DDG 51s SPY-6 v1 radar needed to find and counter heavy enemy threats such as incoming ballistic missiles, the EASR radar relies upon nine RMAs to perform its mission.