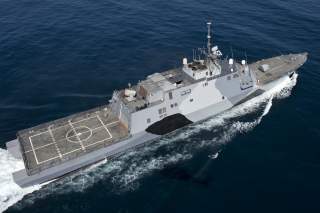 The U.S. Navy has begun realistic testing of short-range surface-to-surface missiles aboard one of its Littoral Combat Ships.

The tests are a prerequisite to arming some of the Navy's LCSs with missiles that are capable of destroying small boats, and signal a major improvement in the warship's ability to defend itself from attack.

But neither the new Surface-to-Surface Missile Module, nor the planned addition of an over-the-horizon anti-ship missile, remedies the LCS's biggest problem. The type is woefully under-armed for high-intensity warfare.

Which is why the Navy is rushing to develop a replacement vessel with more and better weaponry.

USS Detroit, a mono-hull LCS built by Lockheed Martin and the seventh in the class, began missile testing off the U.S. East Coast on Nov. 17, 2018, the Navy announced. The tests would end in early 2019, the service stated.

Workers installed on Detroit a launcher packing 24 Hellfire missiles. The Hellfire module complements the Detroit's 30-millimeter and 57-millimeter guns, enhancing the ship's ability "to counter small-boat swarming threats," according to the Navy.

Poorer U.S. adversaries such as Iran have acquired large numbers of speedboats and equipped them with guns and rockets, intending to swarm American warships during wartime and overwhelm them through sheer numbers.

Swarming is a tactic of the desperate. Richer adversaries such as China and Russia plan to combat the U.S. fleet by traditional means, with long-range anti-ship missiles. Against these, the LCS has few defenses.

All things being equal, an LCS has little chance of striking an enemy warship before the enemy vessel launches its own anti-ship missiles. At present, the Hellfire with its five-mile range and 20-pound warhead, is the LCS's most potent surface-to-surface weapon. By contrast, a YJ-18 missile, which is standard aboard Chinese destroyers, carries an approximately 500-pound warhead around 300 miles.

In May 2018, the Navy awarded Raytheon a contract to begin integrating the Norwegian Naval Strike Missile on some LCSs. With its 275-pound warhead and 100-mile range, the Norwegian weapon represents a major improvement over the Hellfire, but it still can't match many Chinese and Russian missiles.

The Navy is developing new, more powerful anti-ship missiles, but in general they require vertical-launch cells, which the LCS lacks.

The absence of vertical-launch cells also means the LCS cannot carry meaningful air-defense weaponry. The type's main defense against air and missile attack is a SeaRAM missile launcher packing 11 rounds at a time. Like the Hellfire, the SeaRAM can hit targets no farther than five miles away. Not all LCSs carry the weapon.

The LCS began development in the late 1990s, when the Chinese and Russian navies were weaker than they are today. Around 2014, U.S. Navy leaders realized the sailing branch had a problem. "The emergence of sophisticated sea-denial strategies has driven a need to shift to an offensive imperative to control the seas," three admirals wrote in 2015.

The Navy had already paid for more than two dozen of the 52 LCSs it planned to buy, at a cost of around $600 million per ship, when it abruptly reversed course. In 2014 the Navy decided to end LCS purchases at 32 copies and buy 20 new missile frigates starting in 2020.

The new frigate would correct the LCS's firepower problem. "By 2030, Littoral Combat Ships and frigates will represent half of deployed surface combatants," the Navy predicted in a 2017 strategy document. "These ships must be lethal, capable and manned appropriately."

To that end, the new frigate must be capable of "holding adversary warships at risk with over-the-horizon anti-ship missile," the Navy asserted in a 2017 briefing. At a minimum, the frigate should carry eight canister-launched anti-ship missiles, according to the briefing.

But the Navy also wants the frigate to carry the Standard air-defense missile, which can hit targets as far as 90 miles away. In U.S. Navy service, the Standard missile requires a vertical-launch cell, so it's likely that whichever design the service picks for its new frigate, it'll include launch cells and, by extension, be compatible with long-range anti-ship missiles.

The Navy plans to select a builder for the new frigate some time in 2019 and build one each in 2020 and 2021 and two per year starting in 2022. The sailing branch expects each frigate to cost around $1 billion, making the type roughly twice as expensive as the LCS is, per vessel.

The extra expense means more and better weapons, which might give the new warship a fighting chance during wartime. At least, a better chance than a few Hellfire missiles afford.