The Navy Wants to Turn Submarines Into Drone Motherships 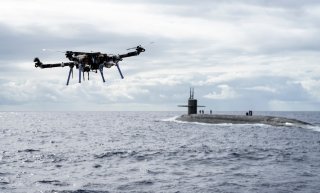 The U.S. Navy would like to leverage submarine torpedo tubes to launch small Unmanned Underwater Vehicles, or UUVs.

Though the U.S. Navy already does field a torpedo tube-launched UUV, called the Razorback, that system needs both divers and a dry dock shelter for recovery, aspects of the UUV that have undermined its usefulness underwater.

“The Medium UUV can go on any one of our submarines. That is a priority for us. We have no problem launching UUVs. That’s easy. The recovery part has been the critical aspect,” Submarine Force commander Vice Adm. Bill Houston said during the annual Naval Submarine League symposium.

The Navy reportedly is systemizing Medium UUV recovery via torpedo tube and from inside the submarines, which, if confirmed, would significantly enhance the UUV’s utility.

“The new UUV capabilities will allow the EOD force to conduct longer duration missions, cover more ocean area and do so faster, which enables the vehicles to get into deeper waters and improves the overall effectiveness of MCM operations in austere environments,” Rear Adm. Casey Moton, program executive officer for unmanned and small combatants said.

However, for the attack submarines, “the team will leverage the work done for the existing Razorbacks UUVs, which were designed to operate from a dry deck shelter or from a craft of opportunity. The new Razorback vehicle will be fully integrated and to accomplish this feat, torpedo tube launch and recovery capability will be integrated into the Razorback UUV,” Moton explained.

“When this… capability is deployed, every SSN will have the ability to serve as a UUV mothership.”

Though submarine-launched UUVs do not yet have offensive weaponry, they nonetheless play a role of expanding importance for submarines as extended eye and ear nodes in the submarine detection network. Moreover, given their small size and electric propulsion, they could, in theory, go to locations not as easily accessible by their larger mother ships and reach destinations more quietly.

However, one limiting factor is the battery life of electric UUVs. The vehicles rely on electric power for propulsion, and their suite of onboard sensors also depends on a steady stream of electricity. Therefore, onboard battery charging before and after UUV missions is key to keeping the UAVs in the water.