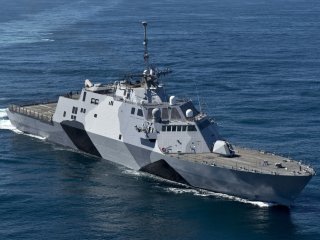 The U.S. Navy is moving forward with its Constellation-class frigate buys, awarding $537 million to shipbuilder Fincantieri Marinette Marine for the third frigate.

The upcoming Constellation-class is based on the FREMM multi-mission ship, a vessel in service with both the Italian and French navies, though with modifications to better fit the U. S. Navy’s needs. The improvements include a modified propeller design for a lower acoustic signature, more electricity generation, and a modified bow design. In addition, the Constellation-class’ hull is lengthier, giving the ships more displacement.

“The Navy has chosen to elongate and widen the hull of its next-generation Constellation-class frigate relative to the [FREMM] parent design, but the officer overseeing its production says the internal layout will largely remain the same,” the Congressional Research Service explains.

“The Italians did a very good job in the design of the internal spaces, and the flow of a lot of those spaces,” Capt. Kevin Smith, program manager for the Constellation-class, explained at a naval conference last year. “You could say we bought a bigger house, [but] from a modeling and simulation perspective, it’s exactly the same.”

The new frigates are designed from the ground up to hunt down enemy submarines. “The Constellation Class Guided Missile Frigate (FFG 62) will be a highly capable and survivable multi-mission platform designed for operations in blue water and the littoral environments. The frigates are designed to operate independently or as part of Carrier/Expeditionary Strike Group or a Surface Action Group, and are manned and equipped for Navy Composite Warfare and Joint Maritime Operations,” the U.S. Navy explained in a statement covering the award.

The Constellation-class will be the United States' most significant anti-submarine asset. The class “has the multi-mission capability to conduct air warfare, anti-submarine warfare, surface warfare, electronic warfare, and information operations,” the U.S. Navy explained.

The first three ships of the Constellation-class bear the names of the U. S. Navy’s first three ships—the USS Constellation, the USS Congress, and the USS Chesapeake. Though single ship crews will operate the vessels, the U.S. Navy may ultimately decide to move to Gold Crew-Blue Crew crewing, an arrangement that allows the ships to be continuously at sea.