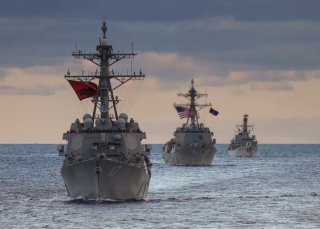 Although the frigates will not be the most advanced ships in the United States Navy’s fleet, they’ll still play an essential role.

Rather than a from-scratch design, the Constellation-class ships will be a modification of an existing design. In addition to reducing development costs, the strategy is low-risk and would, in theory, result in a quicker delivery of ships. A low-risk design is particularly important for the Navy, which has suffered recently from several high-profile failures.

The Constellation-class design is derived from a similar Italo-French design, the FREMM (Fregata Europea Multi-Missione) frigate. That ship comes in two variants, one for the French Navy and another similar ship for the Italian Navy.

Generally speaking, the American version is larger, features a redesigned propeller for better acoustics, a more powerful generator, and a modified bow design.

“The Navy has chosen to elongate and widen the hull of its next-generation Constellation-class frigate relative to the [FREMM] parent design, but the officer overseeing its production says the internal layout will largely remain the same,” the Congressional Research Service explained.

“The Italians did a very good job in the design of the internal spaces, and the flow of a lot of those spaces,” Capt. Kevin Smith, program manager for the Constellation-class, told attendees at the Sea Air Space exposition on Monday, August 2. “You could say we bought a bigger house, [but] from a modeling and simulation perspective, it’s exactly the same.”

It further added that the ships should be capable of operating “in both blue water (i.e., midocean) and littoral (i.e., near-shore) areas, and capable of operating either independently (when that is appropriate for its assigned mission) or as part of larger Navy formations.”

And though the ships will initially be operated by single crews, the United States Navy would ultimately like to equip the class with dual crews, an arrangement called blue-gold crewing that ensures the ships can always go out to sea with fresh crews. The technique is used for most Navy warships and submarines.