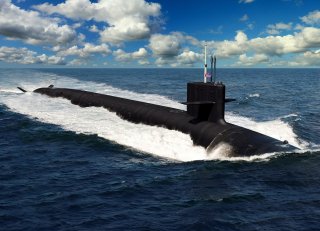 The primary reason? The yet to be built Columbia-class nuclear-powered ballistic missile submarine.

The Columbias are to replace the aging Ohio-class nuclear-powered submarines which first entered service in the early 1980s. Gilday drew parallels to the Navy’s budget in the 1980s, which was proportionally larger than today’s naval budget. Speaking at a naval symposium, Gilday said, “One percent of the DoD budget would be $7 billion per year in the shipbuilding accounts,” he explained. “If I make some comparison from today and I go back to the 1980s, there are some similarities there.”

Proportionally, the Columbia-class just costs more than the Ohios did, Gilday explained, saying “Now, let’s go back to when we were building Ohio in the 1980s: It was about 20 percent of the shipbuilding budget. Right now, Columbia is about 20-25 percent. In FY26-30 it’s going to be about 32 percent. That’s a lot of dough. In the 1980s, the Navy’s percentage of the DoD budget was 38 percent. Right now, it’s 34. So I think historically I have a case to make.”

The case for an increased naval budget makes sense. China’s PLA Navy is building up — and fast. According to some, the Chinese fleet is the fastest-growing in the world. In order to counter the threat China’s navy poses to U.S. interests, more boats might be needed.

The Trump administration’s policy of building a 355-ship Navy by 2034 is intended to better meet the challenge in the Pacific, but the way in which the Navy reaches that target has been criticized. To meet the 355-hull requirement, a number of upgraded but decidedly aged Arleigh Burke-class destroyers are to supplement the Navy’s fleet numbers. Due to the class’ age, they may prove to be of limited usefulness in modern naval warfare, especially as lasers, directed energy weapons, and other more advanced capabilities are improved and put into operational deployment. The Arleigh Burke-class simply cannot produce the necessary energy output to power these weapon systems with the limited onboard space they have.

The Columbia-class is rightly the Navy’s top priority and will ensure the Navy can field a capable replacement to the Ohio-class. Still, balancing the Columbia program with naval fleet expansion will be extremely difficult at current budgetary levels without preventing a loss in capabilities. To prevent the Navy from becoming a hollow force, Congress may need to shift resources seaward.