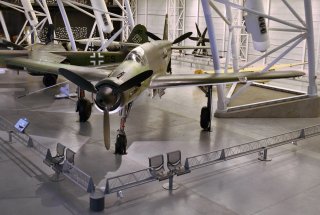 Here’s What You Need to Remember: During World War II, the German military developed some truly revolutionary aircraft including the Me-163 “Komet,” the only rocket fighter ever produced; the Me-262, the first successful jet fighter; and the Ho 229, the “flying wing” aircraft is similar in concept to the current generation of stealth aircraft. Yet, often forgotten, even by many aviation buffs, is the Dornier Do 335 Pfeil (Arrow), which had the distinction of being the fastest piston-engine fighter developed during World War II.

The aircraft was unique in that it featured two engines, but instead of placing the engines on the wing, the Pfeil utilized a distinctive push-pull configuration, where a forward engine in the nose would pull the aircraft while the second engine in a compartment at the rear would push the plane. This resulted in better performance than other twin-engine designs in part because of lower aerodynamic drag due to the in-line alignment of the engines. This enabled the plane to reach speeds approaching 475 miles per hour, and it had a rate-of-climb of approximately 1,750 feet per minute.

The concept actually predated the war and Doctor Claudius Dornier designed and patented what would become the Dornier Do 335 Pfeil in 1937, but development was slowed due to other priorities for the Luftwaffe. Originally conceived as a high-speed bomber the development stalled and in 1942 Dornier was told the project was canceled and then told a multi-role fighter based on the same general concept would be accepted.

The company moved forward, but the changes of roles hampered the development and it was only in the fall of 1943 that the first prototype took flight. The aircraft proved fast, agile and seemed to be the sort of “miracle weapon” that the German military so desperately sought to turn the tide.

Production ramped up in 1944 but only a total of forty- eight of the Dornier Do 335 Pfeils were completed during the war, and these only entered service in January of 1945—far too late to make any difference for the Third Reich. Armed with a single 30-millimeter Mk103 cannon and twin 15-millimeter MG 151 cannons the Pfeil was reasonably armed.

While it was a speedy plane it was reportedly difficult to fly due to the fact that the pilot had restricted vision because of heavy framing and a long nose assembly forward of the cockpit as well as the raised fuselage to the aft.

It was innovative in that it featured modern retractable tricycle landing gear, which needed to be reinforced to accommodate the increased weight of the two engines and heavy airframe. The aircraft sat higher off the ground to further deal with the clearance of the large-diameter propeller systems, notably the rear propeller as the aircraft tipped rearwards during takeoffs.

Another complication for the pilot was simply exiting the aircraft due to the placement of the rear-mounted engine, and if the pilot needed to safely eject he'd have to jettison both the tail fin and rear propeller, which could be completed with the use of controlled explosives. That would give the pilot the needed safety to roll out of the aircraft but was likely something few pilots would ever want to experience in practice!

The United States military captured two of the aircraft at the end of the war, and those were reviewed and tested but the complexity of the aircraft—not to mention the fact that the jet age was dawning—resulted in little beyond those being a curiosity study. Today, only a single surviving Dornier Do 335 still exists. It has been restored and is now in the collection of the Steven F. Udvar-Hazy Center of the National Air and Space Museum.