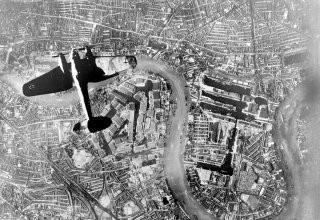 While the Battle of Britain had begun on July 10, 1940 – it was eighty years ago this week that the strategy of Nazi Germany shifted towards the large-scale night attacks known as "the Blitz." From September 7, 1940, to May 11, 1941, the German Luftwaffe engaged in a nighttime terror campaign that targeted the cities of Great Britain.

From July to September the Luftwaffe had largely attacked the UK's Royal Air Force Fighter Command as a way to gain air superiority as a prelude to Operation Sea Lion, the cross channel invasion of Great Britain. However, due to poor intelligence and the fact that British aircraft production outpaced the Germans, the Luftwaffe was unable to gain an upper hand.

After seeing that the British Fighter Command couldn't be defeated, Adolf Hitler gave the go-ahead for a change of strategy that focused the bombing on Britain's industrial centers. This originally was conducted in daylight, with London being the primary target.

Within a few weeks, due to mounting losses, the German bombing missions were largely conducted at night. As a result, the British found it difficult to counter as they lacked effective anti-aircraft weapons or the necessary searchlights to help target the German bombers. British cities were bombed hard – London was subjected to some 76 consecutive nights of attacks.

But the efforts didn't break the British spirit.

In fact, the efforts to demoralize and subsequently defeat the British completely failed, and moreover it also did little to damage the war economy. For those eight months, the bombing never seriously hampered British war production, which instead increased.

The greatest impact of the Blitz was actually that it caused the British to disperse the production of aircraft and spare parts, while studies have largely indicated that apart from some notable exceptions most cities took just 10 to 15 days to recover when hit severely.

Among the most significant efforts to break the will of the British people came in December 1940 when London was targeted on the night of December 29/30, 1940.

The bombing caused great fires over an area that was actually greater than the Great Fire of London in 1666, and the fires started by the German attack included an incendiary bomb that broke through the dome of St. Paul's Cathedral.

While only 160 people were killed, and another 250 injured, it is believed that as many as 100,000 bombs fell on the city from some 136 Luftwaffe bombers. One reason for the lower casualties is that the raid was focused on a part of London that contained largely non-residential buildings including offices and warehouses.

Firefighting efforts were slowed due to a water shortage, as the city's main water-main was hit in the attack, which caused water pressure to drop. In addition, a dozen of those killed were firefighters.

End of the Blitz

In early 1941, the German Navy persuaded Hitler to focus on attacks on Britain's maritime resources including its ports. The Luftwaffe subsequently conducted 46 raids between February and May, which were directed at the port cities of Belfast, Bristol, Clydeside, Hull, Merseyside, Newcastle, Plymouth and Portsmouth.

In addition, throughout the winter of 1940-1941, the Luftwaffe's campaign became essentially aimless. In the spring of 1941, the active British defenses improved, and this included anti-aircraft guns and searchlights, while radar also helped warn of incoming bombers. Germany's casualties increased and those losses couldn't be replaced.

With plans to invade the Soviet Union, as well as an expanding war in North Africa and the Mediterranean including the German invasion of Crete, the Luftwaffe simply lacked the resources to continue the Blitz. However, the final raid on London – on May 10, 1941 – was among the largest of the campaign. It had the highest nightly casualty figure of the Battle of Britain with 1,364 killed and another 1,616 seriously wounded.

In the end, the Blitz failed to achieve the goal of breaking the British and did little more than waste German resources that could have been used in the campaign against the Soviet Union.