The Neo-Malthusian World of the Coronavirus 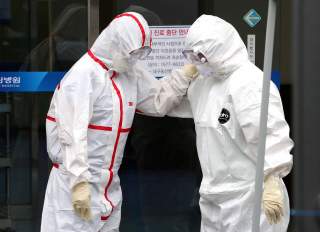 Mention the name “Malthus” and you are met with a storm of abuse. The media elite, protected from nature in their urban bubbles, never tire of pronouncing Thomas Robert Malthus’s An Essay on the Principle of Population, published in England in 1798, as wrong. It is quite true, Malthus’s specific theory – that population increases geometrically while food supplies increase only arithmetically – never worked out, because of the role of human ingenuity in exponentially increasing food supply. Nevertheless, Malthus helped introduce the subject of ecosystems into contemporary political philosophy, thereby immeasurably enriching it. He saw man as a biological species affected by natural conditions and the densities in which we inhabit the earth. He imagined the political effects of such things as disease and famine, and the miserable quality of life among the badly urbanized poor. Perhaps the reason why Malthus always has to be denounced as wrong is because the biting fear exists that at some basic level he is right.

To say the world is over-populated is a dangerous value judgment, since people must decide on their own whether or not to have children. That is not my purpose. But I am saying that a more populated world will have different and potentially dangerous geopolitical dynamics.

True, human ingenuity can eventually solve every resource problem, but often not in time to prevent major political upheavals. The history of the earth and man does not proceed smoothly. Water shortages and desertification have been environmental background noises to the Arab Spring and the war in Yemen. While in relative terms human population growth is declining, leading to a grayer planet, in absolute numbers it is still increasing, most recently among young males in the most fragile states, the ones who cause political upheaval. Though Malthus was famously wrong on a specific point, his sensibility about population and resource scarcity helps define the current age. I placed a bet on that theme when I wrote in The Atlantic in February 1994 that the natural environment would become “the national-security issue” of the 21st century.

Let’s start with China’s coronavirus, which constitutes the most significant geopolitical event since the 2008-09 Great Recession, threatening the reputation and perhaps eventually the survivability of some regimes. With world population increasing from 7.7 to nearly 11 billion people by 2100, with human beings in intimate contact with wildlife in developing countries, and with intercontinental passenger air travel having increased by leaps and bounds since the end of the Cold War, pandemics will continue to be a natural accompaniment to a neo-Malthusian world.

Super-storms, earthquakes, droughts, floods, and bushfires are common in the history of the earth. But never before have they occurred in places inhabited by vast urban conurbations, in environmentally fragile places where human beings were perhaps never meant to live in such large numbers in the first place. Because world population has soared five-fold since 1900, even normal climatic and seismic variations – never mind climate change – will take an ever-larger toll in lives and material property as we increase in numbers to almost 11 billion. Hurricane Katrina in New Orleans in 2005 and Hurricane Harvey in Houston in 2017 - together costing a quarter of a trillion dollars in damage - in addition to the vast suffering from perennial floods in Mozambique and the 2011 earthquake in Japan that caused the Fukushima nuclear disaster, are just a few of the many examples of natural events interacting with historic population growth that requires unprecedented energy and infrastructure to sustain.

Moreover, with 40 percent of the human population living within 60 miles of a coastline, a rise in sea levels will be increasingly catastrophic. The Indian Ocean tsunami of 2004 which killed an estimated 225,000 people was one example of a natural event joined to massive population increase over a relatively short period of time. Tens of millions of people in the Nile Delta and Bangladesh, living at sea level by the Mediterranean and the Bay of Bengal, could be threatened by melting polar ice sheets in the course of the century. As the planet heats up, geopolitics will become more tumultuous.

Indeed, with no major carbon emitter coming even close to meeting the spirit of the Paris Agreement to limit global warming to 1.5 degree Celsius, we are facing an increasingly hotter planet, again, with more and more people on it, most recently symbolized by massive crowds of Australians fleeing into the sea to avoid the heat from bushfires in the southeastern part of the continent.

It may only be a matter of time before we have an environmentally driven regime change in a geopolitically pivotal country. The right-wing Nicaraguan junta of Anastasio Somoza fell from power in 1979 because of a train of events that began with his inadequate response to the earthquakes of 1972. The 1992 Cairo earthquake rattled the regime of President Hosni Mubarak because of the dramatically efficient response of the Muslim Brotherhood in distributing relief supplies. Current Egyptian President Abdel Fattah el-Sisi, governing a poverty-stricken and polluted country of 100 million people – up from 60 million in 1992 – is even more repressive than Mubarak: an example, perhaps, of an environmentally driven hard regime that essentially has no answers to the conundrum of keeping order without risking anarchy.

Islamic radicalism is organically related to these neo-Malthusian trends. As populations in the Arab world and Iran have soared over the decades, leading to a historically unprecedented migration to the cities and shantytowns, religion is no longer unconsciously part of the age-old pattern of traditional village life. It has had to be reinvented in the grim anonymity of badly urbanized environments in starker and more abstract ideological form.

The combination of urbanization, climate change, increasingly nutrient-poor soils, and in some cases the creation of new middle classes will drive sub-Saharan African migration gradually northward to Europe in the course of the 21st century, keeping populism there on a permanent low boil. As conditions get harder, on account of the interplay of rising temperatures and rising populations, many Africans will, concomitantly - by virtue of middle-class status for the first time in modern history - have the economic wherewithal to cross the Mediterranean into Europe. This is to say nothing of refugees from African and Middle Eastern wars which are themselves partially propelled by environmental and demographic background noises. To repeat, climate change and growing populations do not cause wars and upheavals: but they do interact with political, ethnic, and sectarian causes, making them worse.

Social media is not directly related to population growth and urbanization, but it does intensify their effects, by abetting crowd psychology. The more urban - the more refined and sophisticated we are compared to country dwellers - the more conformist and motivated by the herd instinct we become in everything from fashion to politics: though everyone declares the opposite. The neo-Malthusian 21st century is - and increasingly will be - a century of crowd formations, potentially driving politics to extremes and placing the political center under threat.

More people need more energy. For much of modern history up to the present, that has meant hydrocarbons polluting and warming the atmosphere. That, in turn, has led to political pressure for cleaner energy. The natural gas revolution is a bridge to that cleaner future. Though, this is arguably a positive development, it, too, is indirectly related to population growth as the race for technological innovation must stay ahead of the increasing planetary demand for it.

Developments in clean energy have been changing the power relationships in the Middle East. Saudi Arabia can no longer depend on U. S. military support to the degree that it used to, partly because of the natural gas fracking revolution in the United States. And that revolution was necessitated by a growing American population’s need for cheaper and cleaner fuel. Geopolitics will continue to change in many direct, indirect, and ambiguous ways as we as a species increase to almost 11 billion before leveling off.

The original Cold War was a static conflict about ideology, which began and ended in Europe, even if the violent battles were tragically fought in the developing world. The developing world at that time was undergoing its own neo-Malthusian changes to which the ideologically oriented superpowers were largely ambivalent. But the recent past of the developing world is the present of our own: in which disease and political disorder are not matters of only the poorest quarters of human habitation. Thus, do not expect the outcome of these new great power struggles to be as linear as the Cold War, which was in fact a tailpiece of World War II. Intellectuals prefer to see history as merely a battle of ideas and ideologies, which are, in turn, products of their own highly evolved urban environments, divorced from nature as they are. But what lies ahead of us will be an interplay of ideologies and nature itself.