Network Everything: How the U.S. Military Wants to Win the Next War 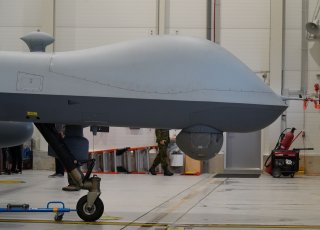 What happens if Russia tried to overwhelm one of the North Atlantic Treaty Organization’s (NATO) forward operating bases? How might U.S. air, sea and land assets coordinate responses? Could a carrier within striking distance of the Army’s location immediately launch F-18s to attack the enemy forces? Could armed Air Force drones be instantly re-tasked to assess enemy formations and conduct emergency surveillance operations? Perhaps a Patriot ground radar might network to an Air Force F-35? At the same time, should none of these platforms and assets be networked in any kind of real-time, lives would hang in the balance as war responses were delayed.

The concept is to avail warfighters of the best sensors, weapons and information in real time, by developing individual platforms as “nodes” on a broader mesh network of sensors. The longer the range and the more integrated, the better. Communications can rely upon hardened datalinks, satellite communications and AI-enabled computer networks able to aggregate and share sensor data.

These are the components of the Pentagon’s Joint All Domain Command and Control strategy, an initiative aimed at realizing this vision of interconnected, or networked combat. The idea is fast gaining traction at the Air Force Test Center at Edwards Air Force Base, California, the location tasked with preparing cutting edge technologies for war through testing and development.

Among other things, this means that the Air Force’s future weapons strategy is going global by placing an unprecedented premium upon platform networking, command and control and integrating otherwise disparate operations across the world. The effort with much of this naturally starts with weapons development, prototyping and testing.

Therefore, the concept, as articulated by Air Force Test Center Commander Major General Christopher Azzano, is increasingly to test emerging weapons, platforms and technology in relation to one another to ensure connectivity between sensors, weapons, satellites and data networks.

“When you consider some of the combined effects on the battlefield, we are trying to take a networked view. We are spread across 34 geographic locations,” Azzano told The National Interest in an interview.