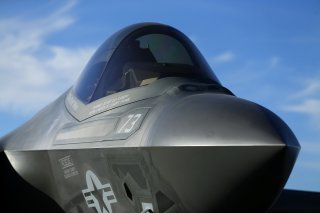 The day is fast approaching when a Ford-class aircraft carrier will set sail armed with F-35C stealth fighter jets, bringing an as of yet unprecedented combat capability to warfare. What might this mean? Will it truly give the U.S. Navy an edge over major power rivals in terms of reach, attack pace and overall power projection? Potentially.

Simply put, some of the main attributes likely to define any margin of difference are speed, stealth and range.

Then there is the element of stealth. The F-35C jet is a first of its kind. It is the only carrier-launched stealth fighter in existence, something which brings paradigm-changing attack options. Prior to the arrival of the F-35C jet, stealth attacks upon enemy air defenses needed to be launched from a fixed land site, which is not only likely to be known to an enemy but limited in terms of range or angle of attack. An ocean-launched F-35C jet, however, can attack from multiple points at sea at varying distances and varying points of entry. There are likely some areas that fixed-wing stealth bombers might not be able to reach without the use of a non-stealthy tanker. Attacks launched by sending F-35 jets into Russia would require the use of fixed sites in Eastern Europe or the Baltics; F-35 jet attacks in the Pacific region would likely need to start from Guam, Japan or Australia.

The ability to project stealth from a maritime environment is of particular relevance in the Pacific region given high-risk areas such as the South China Sea, Senkaku Islands and other coastal areas in the region. Also, other than some places within Southeast Asia, Japan or India to the West, there are not areas from which to attack China that would be unknown to Chinese defenders in position to counterattack. Launching F-35 jets from the ocean, however, might give U.S. forces much better odds against Chinese air defenses in terms of establishing air superiority and opening up an air corridor for further attacks.

Pretty much any engagement between the United States and Russia or China would likely be determined to a large capacity in the air. That is why multiplying stealthy airpower and long-range sensors through maritime use of an F-35 jet is important. It completely changes the air combat equation. Older jets, like the F-22 Raptors would need to launch from land sites to support the mission. The F-35 jet’s drone-like intelligence, surveillance and reconnaissance (ISR) ability and its sheer sensor range can also bring a yet-to-exist advantage. For example, long-range targeting and electro-optical infrared sensors onboard the F-35C jet can operate as aerial ISR nodes able to detect and relay threat data back to surface ships. It can also relay that data to nearby drones or even land-based radar nodes and fire positions. The Navy has already tested the F-35 jet’s capabilities by using it as an aerial gateway to detect incoming anti-ship missiles from beyond the horizon and enable ship commanders to launch an SM-6 interceptor missile from much safer stand-off ranges.

There is yet another factor weighing upon the impact of an F-35C and Ford-class synergy, and that is the emergence of the MQ-25 Stingray refueler drone. Once operational, this carrier-launched air refueler will potentially double the combat attack radius of carrier-launched F-35 jets. This is relevant because it not only offers attacking commanders new options in terms of points of attack, but it also enables carriers to project air power and attack at much greater stand-off ranges, potentially out of striking distance for China’s well-known and much-hyped carrier killer missiles.