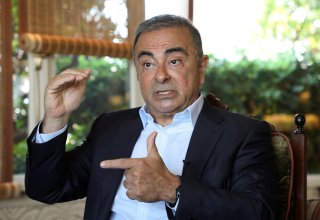 The French government has issued an international arrest warrant against French-Brazilian-Lebanese businessman Carlos Ghosn, the former CEO of Renault-Nissan, who has been a fugitive from justice since December 2019 after his high-profile escape from confinement in Japan.

The French prosecutor’s office in Nanterre, a suburb of Paris, announced on Friday that it had issued international arrest warrants against Ghosn and four “current or former leaders” of Omani car distributor Suhail Bahwan Automobiles, or SBA. The Omanis were charged in relation to a series of suspicious payments totaling 15 million euros, or roughly $16.3 million, between SBA and Renault-Nissan.

Ghosn, who was initially arrested in Japan in 2018 on suspicion of filing false financial statements, fled the country for Lebanon, where he grew up. The former executive has denied the charges of financial misconduct and has insisted that he fled Japan because he doubted that he would receive a fair trial under the Japanese justice system. Japan’s courts have a conviction rate of more than 99 percent, although the system’s defenders note that many cases in which guilt is uncertain are dropped before the trial stage.

After his escape, Ghosn announced that he would “no longer be held hostage by a rigged Japanese justice system where guilt is presumed, discrimination is rampant, and basic human rights are denied.” His lawyers have since argued that, although he remains out of reach for arrest within Lebanon, he has continued to cooperate with French authorities; his spokesman, therefore, expressed “surprise” that French authorities had decided to issue the warrant.

The former auto executive has also hinted that he would be willing to return to France and face trial under the appropriate conditions.

Ghosn’s escape from Japan—in which the automobile tycoon hid inside a box intended for audio equipment on a private charter flight—made international headlines in December 2019 and was regarded as an embarrassment for the Japanese government.

Because Lebanon has a strict policy forbidding the extradition of its citizens abroad, the warrant is unlikely to impact Ghosn’s ability to live or travel within Lebanon, and there is a minimal danger that it will affect his personal security within the country. However, the presence of an international arrest warrant also makes it virtually impossible for Ghosn to cross any international border without being arrested and deported to France to face trial.