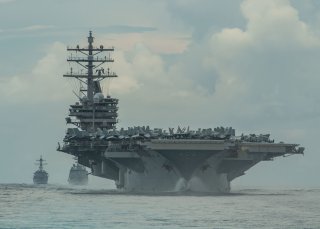 A new Japanese defense white paper takes a strong stand against Chinese provocations, territorial claims and aggressive maneuvers. This appears to be part of an effort by the country to establish boundaries and send a clear message that the Japanese Defense Force is ready to deter China and defend its interests. The white paper, titled 2021 Defense of Japan, notes that “China has continued its unilateral attempts to change the status quo in the East and South China Seas.”

“China Coast Guard vessels are sighted almost daily in the contiguous zone surrounding the Senkaku Islands, an inherent part of the territory of Japan, and repeatedly intrude into Japan’s territorial waters,” the white paper states.

The white paper goes on to cite specifics related to Chinese provocations such as incidents where Chinese Coast Guard vessels have intimidated Japanese fishing boats and intruded into Japan’s territorial waters. Alliances with the United States and other partners are also heavily emphasized in the new paper, which cites the importance of a collective resolve formed to contain China.

“The Alliance is the cornerstone of peace, security, and prosperity in the region, and we will strive to further strengthen its deterrence and response capabilities in order to further solidify the unshakable bond of the Japan-U.S. Alliance,” the white paper states.

Interestingly, the white paper seems to indicate a clear gesture of support for the Pentagon’s Freedom of Navigation Operations by saying Japan supports the concept of a Free and Open Indo-Pacific.  The white paper cites a number of countries that support “Japan’s vision of the FOIP,” including Australia, India, and European countries including the United Kingdom, France, and Germany, as well as Canada and New Zealand.

Japan’s strong defense stance mirrors its recent collaborative weapons-development efforts with the United States, a recent element of which being a massive, multi-billion dollar F-35 fighter jet buy. Japan is a key U.S. partner with a number of crucial weapons systems to include the SM-3 missile and Aegis ship-based radar.

The F-35 jet’s surveillance capabilities, which include the technical capacity to detect enemy assets at long distances before they are visible to the human eye, would certainly offer Japanese forces vastly improved defensive opportunities. A Japanese military armed with F-35 jets and less restricted might also function as an even more credible deterrent or counterbalance against Chinese provocations in the region. A larger fleet of F-35 jets would also give Japan much greater reach, scope and territorial advantage as larger numbers of F-35 jets, engineered with high-fidelity, long-range sensors networked to one another through a common data link, would vastly expand the potential reach of any kind of large-scale engagement with China. China’s much larger size and geographical advantage could be mitigated or offset by larger numbers of dispersed, yet interoperable F-35 jets.

Accelerated weapons acquisition, which hinges on a huge Japanese F-35 jet buy, introduces a wide sphere of tactical and strategic dynamics for the power balance in the region. Additionally, it raises questions about the prospect of further Japanese revisions to its constitutional rejection of the country’s right to maintain a military or employ military force. Japan is unlikely to fully embrace the concept of a forward-operating-offensive military force. Still, it is clearly involved in a massive effort to strengthen its defense posture for the purpose of deterring China and ensuring a stable balance of power in the region.

The Japanese Self-Defense Forces, created in 1954, were intended for purely defensive reasons. Since the end of World War II, Article 9 of Japan’s 1947 Constitution—a section introduced by the United States during the postwar occupation—has formally rejected the state’s right to maintain a military or employ military force. Although the constitution retains a key focus upon deterrence and defensive military forces, some aspects of it may change with strong support from the United States.