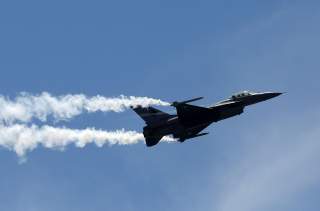 “Tit-for-tat.” The expression evokes the petty aggressions of a long-running feud.

It also describes how two states home to one-fifth of the planet’s population edged closer to nuclear war in the space of a few days.

Two air strikes and a downed jet fighter or two later, India and Pakistan have stepped back from the brink—for now.

Dar’s parents claimed he had become radicalized after being beaten by Indian police. Afterwards, responsibility for the attack was claimed by Jaish-e-Mohamad, an insurgent group formed by, based in, and logistically supported by Pakistan, particularly its Inter-Service Intelligence agency.

Twelve days later at 3:30 AM on February 26, a dozen delta-wing Mirage 2000 jets of the Indian Air Force streaked towards the Line Of Control (LOC) separating Pakistani and Indian-occupied Kashmir, skimming close to the ground to mask their radar signature amidst the surrounding mountains. Four twin-engine Su-30 fighters provided escort. Further back, an ERJ-145 Netra jet with a boom-shaped radar on its back scanned the skies for Pakistani interceptors.

Reportedly, Pakistani JF-17 Thunder fighters scrambled to intercept the Indian aircraft but had too little time to prevent the strike.

This marked the first Indian air attack on Pakistani soil since a 1971 war. It was also the second cross-border “surgical strike” since Indian Prime Minister Modi has taken office. Earlier in September 2016, Indian infantry launched a cross-border raid twelve days after an insurgent attack on an Army base in Uri killed nineteen soldiers. Whether that raid had any military results was also disputed.

Regardless, Islamabad promised it would retaliate “at a time and place of our choosing” with a “surprise.”

“I hope you know what the NCA means…” Ghafoor added, in case his meaning wasn’t clear enough.

Pakistan’s “surprise” was not long in coming. At 9:45 AM the next day, Pakistani jets surged over the Line of Control and launched laser-guided bombs at six Indian targets.

Pakistan claims the fighters were JF-17 Thunders jointly manufactured with China. India alleged the strike package included one or two dozen JF-17s, older Mirage IIIs, and F-16s supplied by the U.S.—the use of which against India would prove controversial.

Simultaneously, Pakistani jets fired back two radar-guided missiles, hitting Abhinandan’s MiG-21. He successfully ejected from his stricken MiG. He was captured by Pakistani soldiers, who rescued him from a violent mob. A video of his interrogation while still bloodied was released by Pakistan, then taken down, followed by later footage suggesting improved treatment.

Pakistan maintains it did not lose any fighters, and that the kill was scored by a JF-17 of No. 14 squadron. However, India shared with media fragments from an AIM-120C-5 radar-guided missile delivered from the United States, which is only likely to have been integrated on Pakistani F-16s.

Some witnesses on the ground reported seeing two aircraft hit and multiple parachutes. On February 28, unconfirmed reports claimed Abhinandan’s missile had hit a Pakistani two-seat F-16B, whose pilot ejected with mortal injuries. However, there so far is no photographic evidence confirming a downed F-16.

Indian and Pakistani ground forces are also exchanging tank and artillery fire across the LOC, injuring and killing civilians and soldiers on both sides. Sadly, such artillery duels have been routine for decades.

Aerial skirmishes might easily have continued. Instead, on February 28 Pakistani Prime Minister Imran Khan announced he would release Wing Commander Vathraman as a gesture of goodwill. This conciliatory move was carried out the following day, and will hopefully bring an end to the current cycle of escalation.

Back from the Brink—For Now

The non-catastrophic resolution of the crisis-du-jour should not inspire misguided confidence that nuclear deterrence will inevitably prevent a war.

Recent history leaves one with every reason to believe the circumstances which caused the recent spiraling escalation are likely to repeat themselves again and again.

For one, the recent crisis made clear that resurgent nationalist and religious sentiment in India and Pakistan created popular support for conflict escalation. Terrorist attacks, air strikes and downed jets are experienced as slaps to national honor demanding violent retaliation.

Thus, Modi and Khan face a perverse risk/reward dilemma. Escalate a little, and they score a domestic political point, improving their odds of reelection. Escalate too much and mushroom clouds could start sprouting over the landscape.

Worse, Pakistan’s civilian government cannot necessarily control the violence it is accountable for. True, Pakistan hosts and sponsors JeM, Lashkar-e-Taiba and other organizations that have perpetrated brutal attacks on Indian soil, such as the Mumbai hotel attack in 2008 and the Indian Parliament attack in 2001.

But that supported is from the military and intelligence services. The civilian Prime Minister lacks political incentives to halt such activities, which are popular with powerful religious hardliner factions. Furthermore, the Pakistani military has repeatedly undermined or outright overthrown civilian leaders that cross it.

However, while Pakistan has instigated past rounds of fighting such as the Kargil War in 1999. Moreover, the current surge of violence in Kashmir, begun in 2016, originated on Indian soil with the killing of popular local rebel leader Burhan Wani. The Indian Army’s history of human rights abuses and brutal episodes of sexual violence have weakened perceived legitimacy of Indian rule amongst Kashmiri Muslims, only 3-6 percent of whom turned out to vote in recent elections.

This means neither India nor Pakistan can entirely prevent violence that could potentially lead to nuclear escalation.

To avoid further nuclear showdowns, Pakistan must cease sponsoring and hosting terrorist groups in stark violation of international norms. And India must create conditions for governance in Kashmir that enjoys genuine local legitimacy for both Kashmiri Muslims and Hindus.

Obviously, such changes run against the grain of powerful domestic political forces in both countries. But without change, attacks by Pakistani-linked groups on Indian soil are likely to continue occurring, and a rising India will grow increasingly more inclined to retaliate militarily, tit-for-tat.

If the two nations keep on taking each other to the brink time after time, one incident or another could eventually carry them over it.