New Long-Range Weapons (Like These) Could Change Warfare Forever 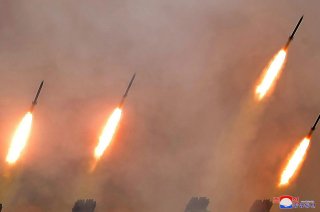 Here's What You Need to Know: There are many new, cross-domain technologies that are improving the ability of the Army to wage war.

Yuma Proving Grounds, Arizona - There are many now-underway tactical adjustments being pursued by the Army as it adapts to new technologies and seeks to transform into a new era of warfare. Among these are the drones, lightning-fast sensing and shooting, air-ground-sea-space attack coordination, and lots of networked weapons systems.

“I think what you are going to see is really the depth and range of the battlefield. It will be a joint-forces fight across hundreds and thousands of miles,” Gen. James McConville, Chief of Staff of the Army, told me during Project Convergence 2020 at Yuma Proving Grounds, Ariz.

The exercise demonstrated an ability to close the targeting loop or decision cycle from detection to fire from as long as twenty minutes down to twenty seconds. One particular innovation enabling this was not only manned-unmanned teaming, but unmanned-unmanned teaming wherein a Gray Eagle drone networked with a forward operating mini-drone called Air Launched Effects. This, as Army leaders described, extended the range, scope and target envelope for attack missions well beyond “line of sight” and what service leaders described to me as the “visibility line.” Moreover, Gen. John Murray, Commanding General of Army Futures Command, told The National Interest that more drone-drone operations we planned in coming years.

Many of these experiments, and the results they yielded, are aligned with specific sequences or phased-progressions intended to characterize emerging Combined Arms Maneuver approaches. First, space, aerial and extended sensing will “penetrate” an enemy perimeter to establish context and targeting, then long-range precision fires will “disintegrate” or destroy key assets. For example, this could mean destroying enemy air-defenses or troop fortifications before ground platforms could engage in “direct fire” attacks. These phases explored in Project Convergence were explained by one of its coordinators, Brig. Gen. Ross Coffman, Director, Next Generation Combat Vehicles Cross Functional Team, Army Futures Command.

A big difference with how warfare is expected to evolve into the future is not only added range, new arenas such as cyber and space and multi-domain attack, but simply the “speed of war.”

This is the fundamental concept informing Project Convergence. The goal is to get ahead of an enemies’ decision cycle. Detect, Track and Destroy targets faster than an enemy can. New networking, new domains and artificial intelligence are all centered upon this premise, which places a premium on the need to gather, organize and disseminate information to attack and close with an enemy at lightning speed.

“In many cases, the less humans are involved, the faster you are going to go. However when you are talking about a lethal decision, there will always be a human involved,” Murray.

“Perhaps there is an unmanned vehicle at the front of the formation. With the sensors and video that comes back, you are going to see as if you were actually there. You could be under armor but when you look left and look right you don’t see the armor because of the way the sensors are set up… or you could be a lead aircraft going through an integrated air and missile defense network and, because of the way the technology is set up, you feel like you are there without physically being there. These are the types of things that are going to change the way we do business in the future,” McConville told me.