V-280 Is Coming: Get Ready for the Army’s New Air Assault Aircraft 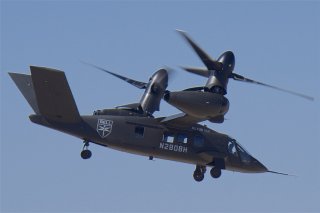 It flies faster than three hundred knots. Pilots can see through the walls like it is Wonderwoman’s invisible jet. It can network targeting data, control nearby drones from the air and fire a new generation of weapons. It is designed to “hover” and maneuver like a helicopter, with an ability to transition into high-speed airplane mode. It is Bell Helicopter’s V-280 Valor, an industry aircraft now being flown by Army pilots as part of an ongoing competitive process through which the service will select its new Future Long-Range Assault Aircraft, a future aircraft intended to replace, and exceed, the Army’s current Black Hawk helicopter.

“This is a tremendous opportunity for Army Experimental Test Pilots to fly the tech demonstrators developed under the Joint Multi-Role Technical Demonstrator Program; providing an initial familiarization with advanced rotorcraft technologies we might expect to see in the Future Long-Range Assault Aircraft program of record,” Brig. Gen. Walter Rugen, director of the Future Vertical Lift Cross-Functional Team.

The Army’s new helicopter, which could either be Bell’s V-280 or a Sikorsky-Boeing SB > 1 Defiant offering, was originally slated to emerge in 2034 and has now been moved up to 2030 due to rapid progress, technological advances and the Army’s need for a new platform to rival modern threats.

Maj. Wesley Paulsen and Adam Cowan were the pilots who flew the tiltrotor aircraft.

“The Army pilots demonstrated current tactics, techniques and procedures. They brought realistic or recent combat experiences, bringing new material for future designs and added mission relevance. We wanted to give them a sense of the acceleration, deceleration, speed and maneuverability,” Don Grove, the chief pilot for Bell and V-280 Valor, told the National Interest in an interview.

An Army statement said both Bell and Sikorsky received Competitive Demonstration and Risk Reduction contracts for a two-year phase.

“The FLRAA is on track for full rate production by 2030,” David Hylton, who handles public affairs and strategic communication for the Program Executive Office Aviation, said in a statement.

A key element of the acceleration, which has been successful so far, is what Rugen called an ability to “upgrade at the speed of technology.” This means that software and hardware configurations are being engineered to accommodate new weapons, sensors, computer systems and engine technologies. “We are seeing a four-year acceleration due to industry investment. We are pleased with their work and want to maintain that momentum,” Rugen explained to the National Interest in an interview earlier this year.

Bell’s offering uses an advanced sensor suite similar to the one now arming the F-35 fighter jet, a 360-degree series of cameras providing surrounding surveillance. For the Bell 280V, it is called the Pilotage Distributed Aperture System (DAS). Wearing specially configured goggles and helmet systems, pilots draw upon six surrounding cameras engineered to stitch together imagery, Grove said. This gives the crew an ability to persistently see in all directions in real-time, and potentially detect enemy targets, incoming attacks and other items of interest from any direction.

The DAS system will also form the basis of a small-arms enemy fire detection technology, which will search for and locate the signature of incoming enemy attacks. The sensors will be able to discern the location and heat signature coming from enemy small-arms fire, giving the aircraft an opportunity to quickly attack with its weapons—lowering the risk of injury to the pilots, crew and passengers.

Other intended attributes include an ability to perform unmanned flight missions, extend networking and target ranges for on-board sensors, operate in what’s called “high-hot” conditions such as six-thousand-foot and 95 degrees Fahrenheit where thinner air makes helicopter maneuvering much more difficult. While there is no formal designation of “stealth,” the blended fuselage and gradually-angled front end of the V-280 does give the aircraft a bit of a radar-signature reducing look. Also, while stopping short of offering any design specifics, Rugen did in a general way explain that is it is important for new generation aircraft to operate successfully amid the “radar clutter,” and of course remain as undetectable as possible.

An expanded combat radius will enable the aircraft to operate more easily on a single mission without needing Forward Arming and Refueling Points, or FARPs.

“We want the ability to operate the aircraft, conduct near-peer air assaults and show up in places where the enemy does not expect us,” Rugen said in his interview with the National Interest.