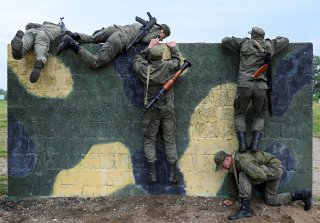 Despite the fact that there isn’t really all the much of 2020 left on the calendar, there are now claims in Moscow that the 70 percent of the Russian Armed Forces will be equipped with brand-new and even “cutting edge” weapons and military hardware by the end of the year.

“I think that upon the results of this year we will achieve a coveted amount, as we will approach to 70 percent in our army’s rearmament with advanced and promising types of weapons and military hardware,” Deputy Prime Minister Yury Borisov said in a televised interview with Rossiya’23 news channel on Saturday.

Borisov said that state defense orders had not been, and will not be, disrupted due to the still ongoing novel coronavirus pandemic. Those claims were made despite the fact that the annual Victory Day parade, which is used to show off Moscow’s latest weapons, was delayed from May until June due to coronavirus concerns. In addition, last month’s Army-2020 International Military-Technical Forum was significantly scaled back.

“Russian defense industry workers did not slow down even in the worst period of the pandemic,” he added. “The plans for 2020 will be implemented. We monitor this practically in manual mode.”

While it was smaller than past years, the Army-2020 arms fair still took place, and according to reports some 730 items of armament and military hardware were on display—and this ranged from heavy weapons and platforms such as the T-14 Armata tank, which was offered for sale to foreign customers, to small arms such as the AK-12 and AK-15 assault rifles.

“I can name such products of Rostec [state hi-tech corporation] as the T-14 ‘Armata’ tank, the Su-57 fifth-generation fighter and the entire family of Kalashnikov new-generation assault rifles: the two-hundredth series,” Rosoboronexport CEO Alexander Mikheyev told Tass in the run-up to the Army-2020 international military and technical forum.

“Among the products of other manufacturers, I would like to mention the Bumerang standardized combat platform, the 59N6-TE radar capable of detecting hypersonic targets and many other weapons,” Mikheyev added.

The question is when exactly the delayed T-14 Armata main battle tank (MBT) or T-15 armored fighting vehicle will finally enter widespread service. According to recent reports, troops won’t begin to receive the tanks until next year, while it remains unclear when deliveries of the T-15 might begin.

Deputy Prime Minister Borisov did not specify exactly what the new equipment would include, but it has been speculated that it could include the aforementioned AK-12, and in August the first batch of the latest Kalashnikov rifles were delivered to the Russian Special Operations Forces. Those rifles had officially entered service with the Southern Military District forces that are stationed in the Krasnodar Territory. Last July, some eight thousand AK-12s were also delivered to military units in the Central Military District.

The new 5.45 millimeter AK-12, which is distinguished by its improved ergonomics compared to its AK-74M and AKM predecessors, will eventually replace the Russian AK-74 rifles, which have been used since the Cold War. The Russian military is expected to receive 112,500 AK-12 rifles by 2021.

The Russian military has also been adopting the Ratnik, “soldier of the future” combat outfit. It utilizes lightweight body armor designed to protect up to 90 percent of a soldier’s body, as well as a highly-integrated, wireless networked communication system that provides greater situational awareness and sharing of vital information and intelligence between each soldier and unit.