Army-2020: The Russian Army Is Getting Ready to Show Off Its Best Weapons 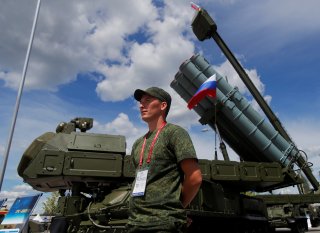 Despite the ongoing global coronavirus pandemic, the Russian Federation is charging ahead with its International Military-Technical Forum “Army-2020” arms fair. This year’s event, which will be held at the Patriot Congress and Exhibition Center of the Russian Armed Forces in Kubinka outside of Moscow from August 23—29, will feature demonstrations of 730 items of armament and military hardware state media reported.

“For the purpose of organizing and preparing the dynamic and static show at the Army-2020 military and technical forum, 730 items of military hardware and armament will be involved,” Western Military District Deputy Commander for Logistics Lieutenant-General Andrei Bulyga told the media last week as reported by Tass.

Work has been underway to prepare the housing stock in six cantonments, and that will provide accommodation for the participating personnel, which will number more than two thousand people including citizens of foreign states. However, the coronavirus pandemic has complicated preparations for the annual event and as of this week, only thirty-five counties out of the 133 that were invited have confirmed the participation of their respective delegations.

“Difficult epidemiological situation undoubtedly complicated preparations for the forum, particularly with regard to the foreign states’ participation. Official invitations were sent to defense chiefs of 133 states,” said Col. Oleg Kulakovsky, the head of the exhibitions department at the Russian Defense Ministry’s Main Directorate of scientific research and engineering support of advanced technologies (innovative research). “By now, thirty-five states confirmed the participation of their delegations.”

“The novel coronavirus epidemiological situation in Russia has improved,” Kulakovsky added. “It has also stabilized in certain countries, and coronavirus restrictions are being eased. Work with foreign states continues. The forum will be the first large-scale international exhibition in Russia in 2020, held after quarantine restrictions were lifted in Russia and worldwide.”

Officials have said that at least four types of preventive measures will be in place during the forum. This will include “barring people displaying symptoms of respiratory viral infection from the event, social distancing of 1.5 meters, use of personal protective equipment and disinfection.”

Despite the fact that the pandemic has resulted in fewer nations confirming participation, the size of the venue is being increased this year.

State media reported that the traditional sites that host the forum, which include the Patriot military-patriotic park, the Kubinka airfield and the Alabino practice ranges, will be supplemented by the Ashuluk practice range in the southern Astrakhan Region where a unique anti-drone system will be demonstrated. In addition, the business program will include more than 170 events.

Among the reported 730 items of armament and military hardware of military hardware that will be displayed at Army-2020 will be the Vityaz-D unmanned deep-sea submersible that submerged to the Mariana Trench in the Pacific on May 8.

“The forum will feature a number of our developments, including the Vityaz-D,” Advanced Research Foundation CEO Andrei Grigoryev told Tass last week. “This will be the vehicle that submerged to the bottom of the Mariana Trench on May 8, 2020.”

The Vityaz-D became the world’s first fully autonomous unmanned underwater vehicle that reached the deepest point in the world’s oceans. The unmanned submersible operates with the help of an onboard control system that utilizes control algorithms without a human operator. That enables the underwater drone to independently bypass obstacles along its course. The platform is comprised of an autonomous vehicle, a deep-sea bottom station, and control post equipment.

The Russian military has not yet announced what other hardware will be demonstrated at the Army-2020 event, but previous events have been used to introduce new weapons platforms such as the T-14 Armata tank and S-350 Air Defense System.