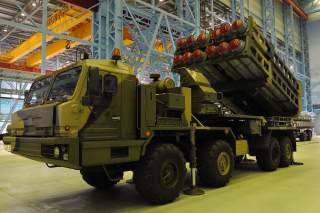 Russia’s Ministry of Defense revealed in late December of 2018 that Russian Aerospace Forces will begin taking delivery of the S-350 Vityaz short-mid range surface-to-air missile defense system this year. The statement also announced the deployment of a dozen Pantsir-S and S-400 Triumf air defense complexes in the same year.

The Russian military has long planned to replace their aging S-300 short-range missile defense system. The original, Soviet S-300P underwent a series of minor upgrades over the span of several decades, focused on implementing more powerful, longer-range missiles. But the manufacturer, Almaz Antey, found themselves brushing up against the technical limits of the S-300 platform with the late 1990’s S-300PMU-2 iteration.

With the S-300 having run its course, a new missile system engineered with modern design principles was in order. As military expert Andrei Frolov put it to Russian news, “Vityaz is a fundamentally new system, not a modernization of Soviet systems, which makes it even better than the Buk-M3 [missile defense system].”

The Vityaz system consists of the 50K6E command post, 50N6E radars, and a 50P6E launcher. It can simultaneously engage sixteen aircraft or twelve ballistic missiles, as opposed to the six targets of the S-300PMU-2.

Vityaz can mount up to 12 9M96E missiles with an effective range of up to 120 km, also used with the larger S-400 missile system but not in any of the S-300 variants. Vityaz fulfills its dual short-medium range purpose with the integration of inertially guided, infrared 9M100 missiles with a range of up to 10 km. This diverse armaments suite makes the S-350 one of Russia’s more flexible air defense systems, relevant against a wide range of threats from glide bombs to certain jet fighters.

The Vityaz project was conceived during a joint Russian-South Korean venture for the production of the Korean KM-SAM surface-to-air missile system in the early 2000’s. Almaz Antey used the prototypes and design principles from the KM-SAM endeavor as a foundation to develop a fully Russian-made missile defense system.

S-350 Vityaz was first tested in 2013, the same year that it was displayed at the MAKS Airshow in Moscow. According to the manufacturer’s initial timeline, the Russian military was to start taking Vityaz deliveries by 2016: “the missile system is ready, rocket tests are ongoing and should finish by the end of this year. Serial production of Vityaz will begin in 2015,” Almaz Antey director Jan Novikov told Russian media. Vityaz was delayed out of reported Russian concern that the target tracking upgrades of America’s competing PAC-3 MSE missile system rendered Vityaz uncompetitive if not obsolete.

The S-300 line was distinguished by its myriad of variants, adapted for a wide range of operational use-cases. The S-350 seems poised to follow in the S-300’s prolific footsteps, with a naval version already in the works.

While export plans are currently unknown, the global popularity of its the S-300P predecessor all but guarantees that the S-350 will make its way to the global arms market. Frolov highlights its alleged cost-effectiveness: “this [S-350] system will obviously be cheaper than the S-400. This can attract serious buyers.” Frolov goes on to highlight India, Armenia, and Vietnam as prospective buyers, among others.

The aforementioned Pantsir-S and S-400 Triumf units are being stationed in Crimea, Kaliningrad, and Khabarovsk, while deployment plans for the S-350 have not been announced. It seems likely that the system will be deployed in Syria if it hasn’t already, and recent reports have observed that Vityaz is a cost-effective defense solution for geopolitically sensitive cities like Kaliningrad, as well as Russia’s strategically vital far-eastern regions.